In spring 2000, OSCE High Commissioner for National Minorities initiated discussions for establishment of a new university in the Republic of North Macedonia, which was supported by international donors.
Following the adoption of the Law on Higher Education by the Parliament of the Republic of North Macedonia, that allowed the founding of universities that are not related to the state and supported higher education in Albanian language. In late 2000, OSCE High Commissioner for National Minorities started the planning of the University. Construction work started in March 2001, and South East European University (SEEU) was opened six months later. In November 2002, the number of students was 2250, and in October 2003, the number of students was 3700. 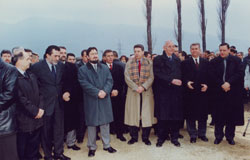 From opening its campus in Tetovo in October 2001, it has succeeded in establishing itself as a quality-led, financially sustainable university. It is now regarded as a model for multi-ethnic, multi-lingual higher education in South East Europe.

Moreover, it has succeeded in combining the best of European and US experience, and has continued to benefit from academic collaborations sponsored by the EU Commission and USAID, among other donors. It benefits from scholarship support provided by The Netherlands and The Open Society Institute. Its history, which you can read in 'About the University' is a fascinating account of how SEEU has reached this position of strength against a background of political and economic uncertainties in the region. Now SEEU reaches out to other institutions in promoting research collaboration, exchange of students and staff and its community.

The University is equipped with many facilities that serve students in achieving their goals within the disciplines they have chosen.
Wanting all graduates to benefit fully from their solid academic backgrounds, the University provides support and practical advice concerning their careers. To support this, the university has signed cooperation agreements with private and public enterprises that can incorporate students in continuous practical work where they can maximally use the knowledge and skills acquired at SEEU.