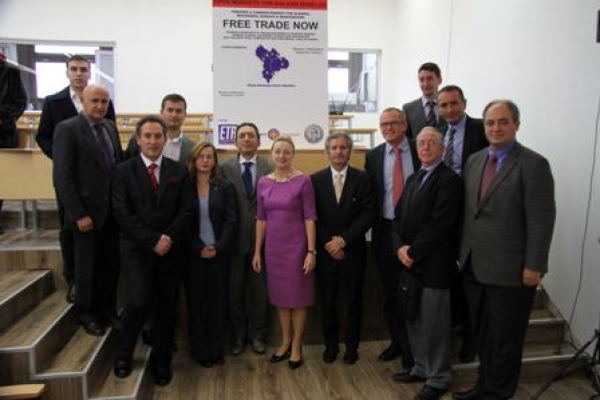 “Regional integration processes represent a positive reaction towards the inevitable pressures of globalization. Contemporary trends of integration lead to regional economic integration, thus greatly contributing to international economic openness. So, when we talk about development trends, instruments, and Balkan policies opposed to global ones, then we must reflect these through a scientific approach for relations between European Union countries, candidate countries and countries in transition”, said the Rector of SEEU, Prof. Dr. Zamir Dika. According to him, these conferences should search for models that respond to regional economic development trends, as a need and response to modern social and economic paradigms. The fact that the development prospects of the Balkans depend on international and domestic developments, obliges us to take concrete action towards creating an enabling environment for foreign investment and the standardization of products and local capacities. The increased confidence of investors is crucial to revitalize the local economies in the Western Balkans. The stability of these economies is necessary for entry into a single regional market. Meanwhile, the single market contributes towards increasing the competition in various sectors of the economy and creates competition for goods and services, Rector Dika observed.

Amongst many scientific and political personalities who attended the conference was Prince Michael of Liechtenstein.

The conference also featured other experts on these themes, such as the Macedonian Defence Minister, Talat Xhaferi; the Pro-Rector for Research at SEE University, Blerim Reka; the Director of the Institute for Political and International Studies, Ylber Sela; the Pro-Rector for Entrepreneurship at SEEU, Miroljub Shukarov; the Chairman of European Tax Reform and Board Member of AGREEI, Günther Fehlinger; the former Deputy Minister for Integration in the Government of Albania, Edmond Hoxha; and the Mayor of Çair, Izet Mexhiti etc.