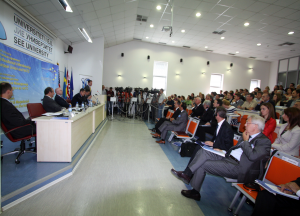 The conference was organized by Columbia University – Peace Building and Human Rights Programme, South East European University, Faculty of Law and Faculty of Philosophy “St. Cyril and Methodius” and State University of Tetova.

In the opening of the conference, SEEU’s Rector and host of the Conference, Prof. Dr. Zamir Dika spoke about the importance of this agreement and expressed his pleasure that the University is part of the conference and thanked the participants who had an active role in concluding the Agreement at the time.

“The particularity of this activity stands on evoking the experiences of the protagonists of this historical event, especially the phases of hard negotiation process in order to reach an agreement, today, the agreement is in function of scientific and academic review in Macedonia, region and worldwide, with a tendency to encourage new experiences and to help all those who have faced or will pass through similar difficulties and to design an optimal path for Macedonia in order to accelerate the integration process, " said among others Rector Dika.

The U.S. Ambassador to the Republic of Macedonia, Philip T. Reeker, during his speech said that: “In early 2001, Macedonia was on the brink of all-out civil war. Yet ten years later, largely thanks to the Ohrid Framework Agreement, Macedonia can celebrate itself as a stable, diverse, multi-cultural, interethnic and interreligious country.”

SEEU’s Pro-rector for Research, Prof. Blerim Reka said that the Ohrid Framework Agreement, in many aspects, has not made the needed progress like: equal representation of communities, equal and fair budget allocation, official use of the Albanian language, etc. As a sign of acknowledgment for his contribution to the signing of the Ohrid Framework Agreement, on behalf SEEU, Prof. Reka gave H.E. Ambassador Pardew a special award.

During the two day conference presentations were also given by ambassadors of various countries accredited in the country, analysts, professors, etc. The conference on Tuesday continued in Skopje, in the Faculty of Economics at the University St. Cyril and Methodius.