Productive Trip to the United States 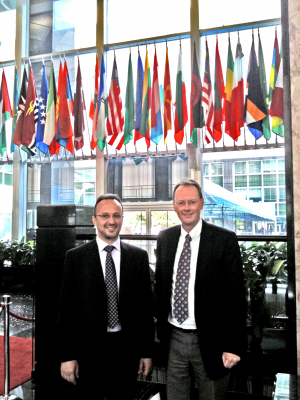 There first stop was in Washington D.C., meeting with officials from the United States Department of State. Rector Dika and Provost Foster met with Mary Ellen Noonan Koenig, Chief of the European and Eurasian Programs Branch of the U.S. Department of State Educational and Cultural Affairs Section. The SEEU delegation briefed Ms. Koenig on the development of SEEU while a discussion on further cooperation with the Fulbright Program was mentioned. SEEU has had previous experience with Fulbright scholars and will continue to welcome them to share their academic experience with SEEU students and staff.

A following meeting included officials from the United States Agency for International Development (USAID), namely, Gary Bittner, Director for Higher Education and Workforce Development, and Dr. Lubov Fajfer, Education Advisor at USAID. As USAID is a major SEEU stakeholder, discussions focused on the founding of SEEU and its continuous development. The meeting also focused on how SEEU could participate in future USAID projects to support more capacity building in the Republic of Macedonia.

After the D.C. meetings, Rector Dika and Provost Foster travelled to Bloomington, Indiana to visit with officials of SEEU’s strategic partner, Indiana University (IU). They met with the President of Indiana University, Prof. Michael McRobbie and numerous IU officials, including: Dr. Charles Reafsnyder, Executive Associate Dean for International Programs, Prof. Patrick O’Meara, Vice President for International Affairs at IU. These meetings focused on concrete steps to further deepen bilateral cooperation between IU and SEEU in the years to come, including specific steps to further develop the SEEU Endowment. President McRobbie noted that he will be visiting SEEU again in the months ahead.

The SEEU delegation continued with further meetings with Faculty officials at IU. They met with leaders of the School of Public and Environmental Affairs (SPEA), including the Dean of the School, Prof. David Reingold and Prof. Mathew Auer, Dean of the Hutton Honors College. These discussions included staff exchange possibilities and furthering curricula development with SEEU’s Faculty of Public Administration and Political Sciences (PAPS) and the potential to create an Honors School at SEEU.

Further meetings were realized with IU’s Kelly Business School and Kelly Direct officials, such as Prof. Venkataramanan, Associate Dean for Academic Programs and Prof. Richard Magjuka, Chair, Global Executive MBA Program and Corporate Kelly Direct Programs. Discussions revolved around a curricula review of the SEEU Faculty of Business and Economics (FBE) academic programs and the engagement of an academic staff from IU at SEEU for a longer period of time. Moreover, Kelly School officials illustrated experiences in delivering online programs and, as SEEU are now offering E-learning academic programs, concrete discussions on cooperation between the SEEU FBE and Kelly Direct on teaching modules were mentioned.

Before returning back to Macedonia, Rector Dika and Provost Foster also visited friends of SEEU at the IU campus in Indianapolis (IUPUI) where a special lunch was organized for all those from IU involved in there capacities with SEEU. They also met with Mexhit Ferati, engaged at SEEU and a PhD student at IU.

This visit to the United States further shows that SEEU will actively pursue further collaboration with the U.S. Government and its strategic university partner, Indiana University.