US Ambassador Philip T. Reeker was Awarded the 2010 Prize for Leadership

On Thursday (05.05.2011), the Institute for Democracy and Development awarded the Annual Prize for Leadership for the year 2010 to the US Ambassador to the Republic of Macedonia, H.E. Philip T. Reeker at the ceremony held in the premises of the South East European University in Tetovo. 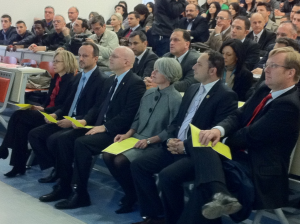 In his address, Veton Latifi, President of the Bord of the Institute for Democracy and Development, highly praised the work and role of Ambassador Reeker in the integration process of Macedonia towards NATO and European Union. Latifi said that Ambassador Reeker was a great encouraging force to the Macedonian authorities, civil society, and people in the process of institutional reforms.

“The Institute for Democracy and Development is pleased to announce the winner of the Award for Leadership for the year 2010, the U.S. Ambassador to the Republic of Macedonia, H.E. Mr. Philip Reeker. This prize is awarded to individuals or public institutions for outstanding efforts and results in the process of democratic consolidation and reforms in the Republic of Macedonia,” said among others, Veton Latifi.

Ambassador Reeker expressed satisfaction for this assessment. He said that he dedicates this award to all U.S. diplomatic personnel in Macedonia, which according to him, has supported the realization of his ideas and projects.

“I feel really honored today, with this prize for leadership and it is a special honor to be here, among colleagues, friends who have joined us today, as Ambassador Sorensen, Ulrika.I really learned a lot from other ambassadors that work in the diplomatic core in Macedonia towards the realization of what we hope to be the best for the Republic of Macedonia. Now when I get ready to leave my post after three years as U.S. ambassador, I will remember special occasions, such as this one today and relations which I have developed over the years, not only with the government but with institutions and organizations”, said among others, Ambassador Reeker.

SEEU’s Rector, Prof. Dr. Zamir Dika, congratulated Ambassador Reeker for the award and has expressed his pleasure for being present in the premises of the University.

“The US Ambassador – as a notion, if divided into two words: US – in this region is recognized as being responsible for the peace and stability we have, the continuous supporter for recognizing our developmental potentials and in starting to recognize that the human rights and mutual – multicultural diversity are the values that can drive us into prosperity. Concerning the second word of the first notion – Ambassador Reeker, I can just simply say: he is a friend of SEEU and Republic of Macedonia. If you read his biography – you will notice that he is bounded with Republic Macedonia and SEEU in a way” said Rector Dika.