Z. Dika: With our academic offer we are competitive in the global market 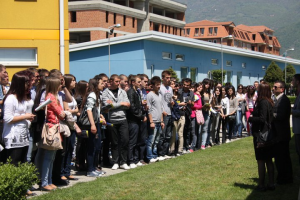 On Saturday (7 May 2011), the annual Open Day event was organized at the South East European University (SEEU), presenting the study offer for the academic year 2011/2012 in the first and second cycle of studies based on the Call for Student Enrolment.

“Being the only university with a private-public not for profit status enables us to accomplish our mission by creating skilled graduates that will be valued by employers, society and are competitive in global market. These young people today are simultaneously worthy citizens of a united Europe. Therefore, out of 1300 new students that will be enrolled in the academic year 2011/12, 412 students will study in programmes in the English language. Our curricula follow the best study trends of European Union countries and the United States. Now, by being the only university with a private-public non-profit status, we are in a phase where we are giving stronger support to the public value that our University creates. This year SEEU broadens its offer with four new study programmes: Economics, Agro-business, Tourism, Leadership and Youth Work in Community”, said among others, SEEU’s Rector Prof. Dr. Zamir Dika. He also underlined the fact that the university is implementing a different methodology from other universities, by adapting it to a new student profile that transforms this university into a ‘personalized university.’

This year SEEU will award 162 scholarships, which will be allocated according to predetermined criteria.In order to be a beneficiary of any of the several types of scholarships awarded by the University, all interested candidates will be subject to qualifying examinations in certain courses depending on the faculty of choice and especially in English language. SEEU, in cooperation with the business community, through the SEEU programme “Invest in Your Future” will offer scholarships to students, and in cooperation with the banks from the countryNLB “Tunska Banka” and “Stopanska Banka,”SEEU students are enabled to apply for student credits/loan with low interest rates.

During the Open Day, focused meetings and discussions within the SEEU Faculties were held, where students were informed in detail about study programmes, gained knowledge, and student competencies gained upon graduation. Moreover, an explanation on the teaching and learning process, student knowledge assessment process, resources, infrastructure and study rules and policies were described to potential students in detail. All students were also informed about the novelty of the next academic year, that being the option for online studies.

The SEEU Campus in Tetovo will offer 16 study programmes, where 7 study programmes will be offered in the English language and other foreign languages, such as: Business Administration, Leadership and Youth Work in Community, Computer Sciences, Business Informatics, Computer Engineering, English Language and Literature, and German Language and Literature. The foreseen vacant number for new students in the Tetovo campus is 1085.

While the SEEU Skopje Centre will offer 8 study programmes, where 4 programmes are offered in the English language, such as: Information Systems and Management, Business Informatics, Business Administration, and Computer Sciences. The foreseen vacant number for new students at SEEU Centre in Skopje is 270.