On 23rd 2011, at his home in Hague-Netherlands passed away our great friend Max van der Stoel (86 years old) a former Dutch Foreign Minister, diplomat of career and one of the pioneers for establishing the Southeast European University in Tetovo, in 2001. 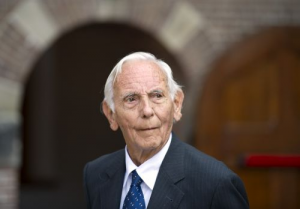 HE Max van der Stoel for two times was Dutch Foreign Minister (during 1970 and 1980), UN Ambassador and Higher Commissioner of Organization for Security and Cooperation in Europe (OSCE).

Our great friend, Max Van der Stoel was a tireless fighter for human rights worldwide. South East European University shares the opinion with the Dutch Prime-Minister Mark Rute that Holland and all peace-loving humans have lost the man-symbol of human rights. On this occasion, the Rector of SEE University, Prof. Dr. Zamir Dika, on behalf of all staff and students send a telegram of condolences to the family of Mr. Van der Stoel, Netherlands Embassy in Macedonia and OSCE.