Fifth Edition of the Winter Universiade 2011

The fifth edition of the "Winter Universiade 2011" officially ended with SEEU’s Rector awarding the winners of the student competition in Alpine skiing. 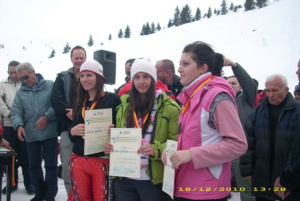 In general winners of this edition were the students of the University “St. Cyril and Methodius”- Skopje with the total number of 88 accumulated points, in second place was SEEU with 85 points and State University of Tetova (SUT) with 68 points.

The competition was of an international character and the competitors were competing in the discipline Giant Slalom, in the magnificent slops of the Touristic Resort of Kodra e Diellit, Sharr Mountain-Tetovo.

“I am glad that I managed to give my contribution about the SEEU's overall ranking in second tour. It gives me courage to continue with engagements in this sport, "said Fjolla Iljazi

The solemn opening of the fifth edition of the “Winter Universiade 2011” was conduct by the SEEU Rector Zamir Dika, who among other said: “Is important to participate, but as well is important to win. This you will prove during the competitions among you”.

The organizer of this event Menan Memedi, said: “It is a real pleasure that the competitions ended in the best possible way, no one was injured, all the competitors successfully completed the competition. The quality of this competition can be proved by the participation of the best two competitors from Macedonia in this discipline Dardan Dehari and Antonio Ristevski. The slops were at the right level and fortunately the weather conditions were ideal".