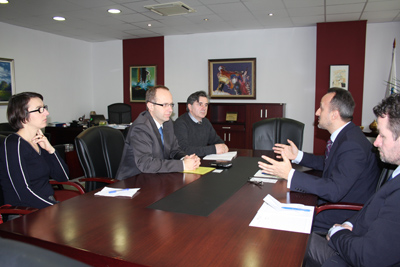 At this meeting, Rector Dika informed his guest about new developments at the University in order to integrate into the mainstream of modern higher education.

SEE University continues to respond to the increasing demands for capacity building that will serve the future generations, said Dika. The University is a model university not only in Macedonia but also in the wider region. Now, we are making efforts to improve and modernize the teaching process and to expand the knowledge horizons of our students. Important is the fact that the primary beneficiaries are students.

According to Rector Dika, concerning the academic part, one of the advantages that distinguishes the South East European University in comparison to traditional universities in the country and region is the ability for continuous development of study programs based on a well-integrated process, by all participants, especially the involvement of professors - international experts from U.S. and European countries. The process of developing study programs follows the recommendations of international standards outlined in the documents that are based on the Bologna Declaration and the best practices of successful international universities, said Rector Dika.

After the meeting, Ambassador Lazzarotto had a tour of the campus, where he visited the University Library and was informed about the readership and the demands of students to be equipped with new editions, which will be used for their needs.