Promotion of transparency in education: Training for youth activists

The campus of the South Eastern Europe University in Tetovo was the host of 26 young students from three different universities in Macedonia, who took part in the “Training for youth activists: Building transparent education systems”. 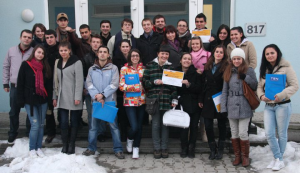 This training was organized as part of the Transparent Education Project [TEN] which is implemented by Youth Educational Forum, in cooperation with the SEE University, and supported by USAID and Education Development Center [EDC].

TEN project activities have been implemented since 2009 with the support of the UNESCO Bioethics Unit at SEEU and the chair professor Mentor Hamiti. The goal of the project is to contribute towards the creation of a transparent higher education environment, by strengthening the institutional and legal framework and to promote good ethical values among all members of the academic community. A list of implemented activities includes: seminars, conferences, public debates, roundtables, videocalls, public campaigns. Project activities implemented in Macedonia are part of the activities implemented by the TEN network members in Armenia, Azerbaijan and Ukraine.

This training which took place on 5 and 6 February 2011 focused on providing a space for open discussion and better understanding of the issue of corruption in education, the causes and long term effects of this detrimental phenomena for the higher education and society as a whole. The group worked on identifying the role of the government, civil and business sector in the fight against corruption in education, as well as discussing the role and responsibilities of each of the stakeholders in the process. One session was dedicated to analysis of the anticorruption tools and policies implemented in the higher education system in Macedonia. Participants worked on developing ideas for public events and campaigns for raising awareness among their peers and wider public about the problem of corruption in education.

After this training 26 young activists will be included in the future efforts of youth organizations and universities for promotion of transparency and ethics in the higher education in Macedonia.