Prof. Dr. Blerim Reka promotes his book, Geopolitics and Enlargement Techniques of EU at the European University in Tirana 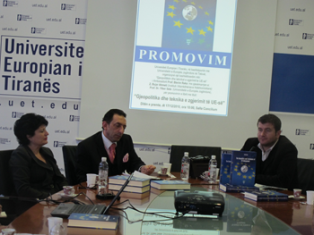 On Friday (17 December 2010), SEEU’s Pro-Rector for Research and Promotion, Prof. Dr. Blerim Reka promoted his latest book, Geopolitics and Enlargement Techniques of EU at the European University in Tirana (EUT). This promotion was opened by the address of the President of EUT Prof. Dr. Teuta Dobi, and followed by the key speech of Prof. Dr. Ksenofan Krisafi (Professor of International law and former Ambassador of the Republic of Albania to Greece). Academic, diplomatic and political elite of the Republic of Albania, (former Prime-minster Bufi, former MFA Milo, five key Albanian Ambassadors to USA, Germany, Netherlands, France and Israel, as well one member of the Albanian Academy of Science and Arts and academic staff and students of EUT and media were present at the promotion.
Prof. Dr. Teuta Dobi said that this scientific work brings an added value because the author, in detail, treats and analyzes the enlargement process of the EU, by giving facts and analyzing various turbulent cases in the history of geopolitics and European Union enlargement, focusing in particular on the enlargement process and future enlargement polices in Western Balkans.
Prof. Dr Ksenofon Krisafi presented comprehensive expertise on geopolitics and enlargement techniques of EU in front of the participants. The options presented in this book are verified as contributions in the regional developments and a step forward in foreseeing the free movement liberalization new geopolitics configuration and even in the international system.
Books of this kind are very rare, said the editor of the book, Prof. Dr. Ylber Sela. "This book has crossed regional borders and has a great importance for the European dimension which presents a valuable and successful work of the academic, diplomatic and professional development of the author."
Prof. Dr. Paskal Milo, Prof. Dr. Fatos Tarifa, Prof. Dr. Enika Abazi, said that published work of this kind such as that of Professor Reka are very rare, the fact that this book is published by the well known publishing house from Brussels, clearly shows that the book Geopolitics and Enlargement Techniques of EU has passed the regional boundaries.
The book is published by the well known publishing house from Brussels ASPECT.
Professor Reka is author of 16 books and 60 scientific works from the field, published in English, German and Spanish.