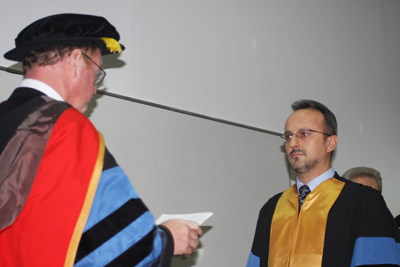 “We made an appointment based not on politics or connections, but solely on merit. The University has set an example of how to do things properly in this modern European democracy” said Dennis Farrington. He also said that Prof. Zamir had first came to his attention over ten years ago. At that time, as an even younger academic and politician he produced for the then International Foundation, papers which showed the efforts made here in Macedonia to improve the access of Albanian-speaking young people to higher education and proposing a solution which eventually led to the creation of the University.

He concluded: “I wish Zamir well in his endeavours and I know that I and the other members of the University Board can rely on all of you to support him fully in the years ahead.” 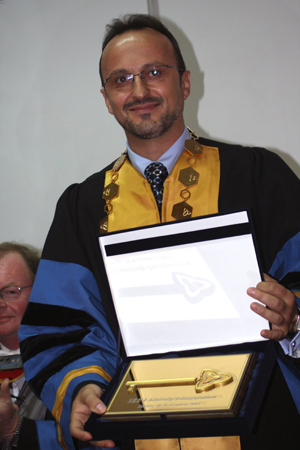 The former Rector of SEEU, Academician Alajdin Abazi symbolically handed over the key of the University to the new Rector.


“This  key was given to me on 20th November 2001, during my inauguration as Rector of the University. I hope that this key will be handed over as a tradition in future to coming rectors in their inauguration ceremonies. The key was given to me at that time by the President of the International Foundation in Switzerland, HE the OSCE ambassador Max van der  Shtul, for the realization of the SEEU project, “, said the Academician Alajdin Abazi.

The new Rector of SEEU, Prof.Dr Zamir Dika thanked everyone for the trust  given and the opportunity of being Rector of this unique University in the Republic of Macedonia and abroad.

“There is no greater honour and privilege than to lead South East European University. Today, in front of you, I pledge my dedication and leadership potential for the University toward realizing our common academic and scientific cause.” said Rector Prof.Dr Zamir Dika .

“From the day of my election as Rector, about two months ago, according to the dispositions of the Law and Statute, I have worked on designing the future direction of the development of the University, in accordance with SEEU’s vision and effective management. In the meantime, I have researched the contemporary dilemmas in this field. I have examined a dozen organizational structures of other universities of different profiles and systems. I have noted that all universities around the world are moving toward changing the paradigm of governance: from collective governance toward corporative management which emphasizes individual responsibility. “ said Rector Prof.Dr Zamir Dika.

He said that difficulties of this transition create a continuous challenge in keeping the balance between corporative responsibilities and academic freedom. An eventual misbalance could undermine academic freedom on the one hand, which is a precondition for the accumulation of new knowledge and innovation, or on the other hand, precisely in the name of excessive autonomy the core mission of higher education may be compromised.

Rector Dika said that  he did not hold a 'magic stick’, but he promised that he  would work to provide an open environment for conversation, creating equal opportunities and fair competition; he would support strict debate, which is based on real analyses; and he would  follow the conclusions that we would bring together.

He said that he had identified several objectives which we should achieve.  Together we should be committed to increasing institutional autonomy and respect for the individual while at the same time change traditions towards accountability and performance evaluation based on a merit system. He continued that we would work on strengthening the identity of the institution - to motivate, support and improve cooperation. We will put learning, research, and innovation in the service of community needs and in the function of creating new ideas.

According to him, without illusions that changes can occur overnight, he believed that the new team that he would be leading will manage and administer the academic, teaching-scientific performance of our university and will know how to make a successful balance, by placing SEEU on the pedestal of values and producing a model for a success story in which both the alpha and omega are committed toward the student and the perfection of quality.