Deputy Foreign Minister of Albania, Edit Harxhi participated in the tribune, “Perspectives of Euro-Atlantic Integration of the Western Balkans” organized at SEEU

“The Perspectives of Euro-Atlantic Integration of the Western Balkans” was the topic of the tribune organized at SEEU, in which the Deputy Foreign Minister of Albania, Edit Harxhi delivered a lecture.  Prof. Dr. Zamir Dika, the Rector elect of SEEU opened the tribune in which occasion this was his first speech as the newly appointed Rector of SEEU. He added that the issue of Euro-Atlantic Integration of the Western Balkans countries needs to tackle educational institutions as well, because in this way the institutions enhance the process towards European Union integration. 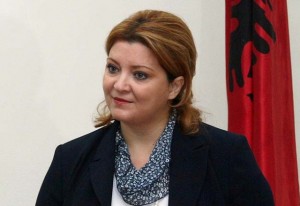 Regarding the topic, Deputy-Minister Edit Harxhi, said that the Western Balkan States need to resolve disputes and move toward Euro-Atlantic structures as soon as possible. Concerning the problem that Macedonia has with its neighbouring country, Deputy Minister Harxhi said that the contribution given by Albania is not addressed directly to Macedonia or Greece, as our neighbouring country as well.

“I think that there is no international forum or regional organization, in which we do not raise our voice and propagate at large the issue of Macedonia's NATO membership, by placing as the main point for the development of peace and stability in the region, but also for a peaceful Balkans after so many years and after so many problems.”

“Albania has always done the impossible and will always continue to promote these wonderful democratic values associated with the Ohrid Agreement, and its correct implementation as an absolute guarantee of peace and stability in the region,” said Harxhi. The Tribune was hosted by the Institute for Democracy and Development, within the activities of the School for Democracy and Leadership. This program, through several months trainings gathers young leaders of political parties in Macedonia.