Press Conference with journalists on the occasion of the end of year: SEEU closes the year with a record number of enrolled students

South East European University is ending a very successful year, where we also set a record on enrolment of new students, in all three study cycles, with a significant increase in undergraduate studies, 13.4 percent or overall increase of registered students of 6%, said the Rector of South East European University, Acad. Prof. Dr. Abdylmenaf Bexheti, at the festive press conference with journalists, which was held today (December 20, 2022), at SEEU Campus in Tetovo. 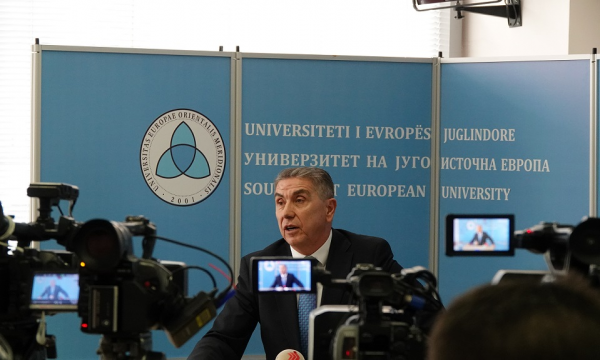 Rector Bexheti said that this happens because of some very significant indicators, including the fact that the market already differentiates quality, about 60% of students use scholarships, which are given to excellent students and this proves that we have managed to attract quite good students, the structure of the parents of our students is highly educated and they know what they are looking for and what to choose when it comes to their children's education.

“What has influenced the increase in the number of students is the new annual academic offer harmonized with the market requirements and this year the very specific, regional offer was consolidated, the interdisciplinary master's program, 3E - Economy, Energy and Ecology, which functions with over 20 students currently. The other news is the opening of a new faculty and for the first time in the 20-year history of the University, in the new academic year we have the sixth faculty, the Faculty of Health Sciences”, noted Rector Bexheti.

"We have strengthened and gave a real character to the internationalization of the University and already, in addition to students from the region, such as Kosovo, the Presheva Valley, Albania, we have registered about 60 students from Tajikistan and Pakistan with American scholarships, through the Shams foundation" said Rector Bexheti.

"All the activities, which are not only purely academic, but professional and applicable, and when we add to this the scientific projects that are implemented by Max van der Stul Institute, from two projects that were in the past, now we have reached 35 parallel projects and which testify strong social impact that the University has on the society", said, among other things, the rector of UEJL, Akad. Prof. Dr. Abdylemanf Bexheti.