"Energy and inflationary crisis", was the topic of the discussion panel, organized by the Student Parliament and Association, held today (18.10.2022), at the South East European University. 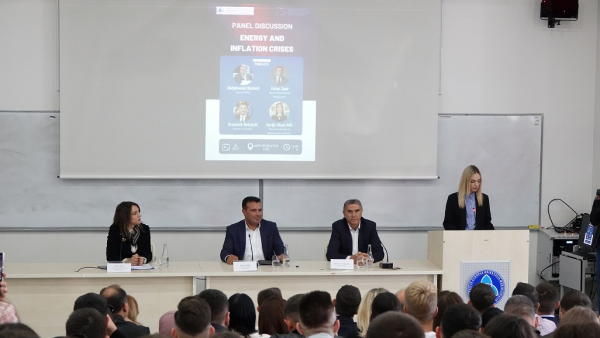 The panelists of this discussion were: the Rector of SEEU- Acad. Prof. Dr. Abdylmenaf Bexheti; former Prime-Minister, in the capacity of businessman-- Zoran Zaev and the Dean of the Faculty of Business and Economics--Prof. Dr. Hyrije Abazi.

In his presentation, Rector Bexheti thanked the former Prime Minister Zoran Zaev and the Student Parliament and Association that made it possible to organize this debate, the first in a series of debates that will be held, meeting together businessmen and academics to present their views and expertise on important social issues.

In his speech, before speaking as a panelist, Rector Bexheti thanked former Prime Minister Zaev for keeping his promise to ensure the University's support from the Government.

"Previous Prime Minister Zaev, on the occasion of my inauguration as rector 4 years ago, gave a public promise, where he said "you provide quality, I will provide your support". Today, I want to publicly thank him for keeping his promise, because politicians rarely keep their promises. I thank him not only for keeping his promise, but also that this support, which the University has redistributed in the form of scholarships, has also influenced the increase in the number of enrolled students, in conditions where all the trends in the country are declining" noted Rector Bexheti.

As a panelist and expert in the field, Academician Bexheti focused on several important components of the current energy and inflationary crisis. He emphasized the importance of the social responsibility of large companies, which should behave quite rationally in raising prices and not take advantage of the situation. Also, regarding the crisis that occurred, Rector Bexheti emphasized that he did not find us surprised, since we know the energy production capacities and that in the past 30-40 years we have invested very little in the energy sector. Regarding the energy measures, he emphasized his demand and insistence to establish a tiered system, or the division into categories of electricity consumption, where the highest category has a tripled price. He called the Government's measure to subsidize social categories for the payment of electricity and the help given in coping with the crisis as an appropriate measure.

"I love this University, because it represents Macedonia in miniature. SEEU represents a multicultural, multiethnic and international environment. We have our children here and at the beginning of my mandate I had the honor to address you and I believe that the money that is returned to you in the form of scholarships is an investment that I am proud of" emphasized Zaev.

Zoran Zaev, as a businessman, described the current economic environment in the country, comparing it with his experience as a politician. He said that in many aspects, the country is going in the right direction and the results speak for that. He mentioned some investments that have been announced and that have been made in the energy sphere and that will obviously affect coping with the energy crisis.

"Our luck is that expectations were quite pessimistic about the crisis, but they have already changed and from the information I have, we have a stabilization of the energy market and this is thanks to the social responsibility of the European Commission, which has made a decision to apply the freezing of energy prices " said businessman Zaev.

Dean of the Faculty of Business and Economics, Prof. Dr. Hyrije Abazi, focused on the inflationary aspect of the crisis. All economies have a certain amount of paper money, and if it comes to an excessive emission of it, it can result in the loss of the value of money. In this situation we have more money, their value is lower and consequently their purchasing power is lost in the direction of consumers and households.

On behalf of the Student Parliament and Association, President Agron Demiri gave a speech, who thanked the panelists for their participation, especially former Prime Minister Zaev, who has always supported initiatives that came from student associations.

In the end, the students and staff present asked questions and developed a conversation about the energy crisis and the measures that are being taken and that should be taken to pass it with the least consequences for the standard of citizens and the economy of the country itself.