iCan in Gostivar held the Employment and Career Fair

Organized by the iCane Center, today (June 3, 2022), in Gostivar was held the Employment and Career Fair, which was attended by representatives of well-known companies from the country, national and local institutions dealing with active employment policies and numerous visitors, mostly young people from the Polog Region. 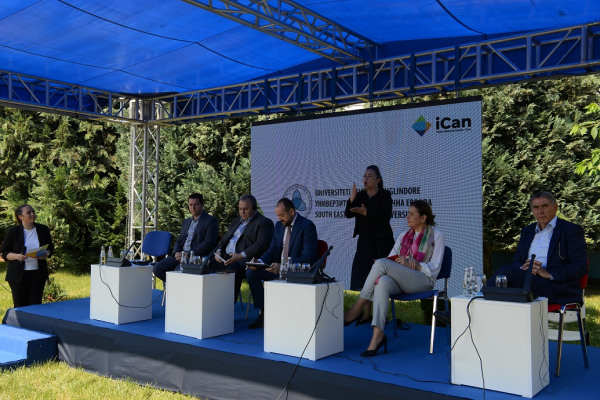 In the capacity of a partner institution of this project, the Rector of the South East European University, Acad. Prof. Dr. Abdylmenaf Bexheti attended the opening part of the Fair, where Deputy Prime Minister Fatmir Bytiqi, Minister of Labor and Social Policy Jovanka Trnçevska, Mayor of Tetova Bilalal Kasami, UNDP representatives and other guests were present.

"Universities are the ones that need to identify and anticipate problems in time, so that policymakers can take initiatives, build their policies. We, as a university, proved this by opening the Career Center, since 2005. Likewise, we as experts and as a University have warned, since 2015, about the asymmetry of the labor market. The University has had, has and continues to have as number one concern the brain drain, not only for its students, not only for the formal programs it has within it, but also the need for permanent training, so we thank the donors, the Swiss Embassy, UNDP and the two municipalities of Polog, Tetovo and Gostivar, for the support given in the opening of the iCane Center", said among others Rector Bexheti in the panel discussion, which was organized within the Fair.

The purpose of the Fair is directly to connect the unemployed youth with the private sector from the Polog Region and to fill vacancies in some industries, as well as to stimulate debate on creating appropriate models for youth activation in the labor market.

The event was followed by several discussion panels related to the labor market and the workforce.