"Challenges of new states in foreign policy", was the topic of the Round Table, which was held today (24.03.2022), at the South East Europe University, organized by the Faculty of Contemporary Social Sciences, where the Deputy Prime-Minister and Minister of Foreign Affairs of Kosovo, Mrs. Donika Gërvalla was invited. 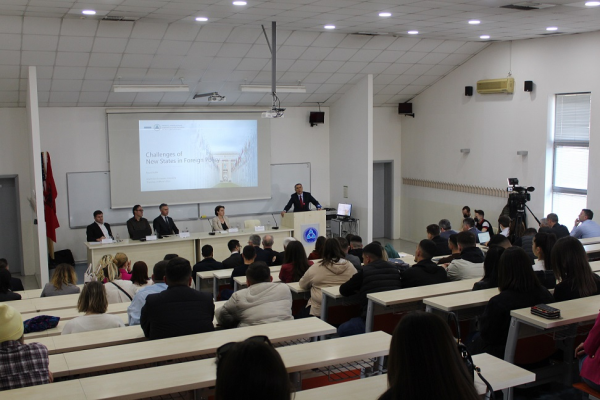 In his opening remarks, Rector Acad. Prof. Dr. Abdylmenaf Bexheti, thanked Minister Gërvalla for her participation in this roundtable with such an actual topic.

"The birth of new states cannot be compared to the birth of a child, who automatically receives a birth certificate, in reality when a new state is born, it has to sacrifice and to work hard in order to prove itself. New states are also new economies. The birth of a state is a very difficult process and with many challenges", said among others Rector Bexheti.

The Minister of Foreign Affairs of Kosovo, Donika Gërvalla, said that she feels privileged to be at this university and that she sees so much interest in hearing about the challenges of Kosovo as a new state. She described the process and difficulties that Kosovo has encountered in its state-building stages.

"Kosovo was the last to end the war and the creation of the state was a difficult process and in its beginnings, the construction of the state of Kosovo began as an international protectorate, to later establish its own independent institutions, in 2008, with the support of the US and EU states. Building a state from the beginning is an unimaginable challenge and all these years Kosovo faces many challenges, starting from the economic ones to the security ones", said Minister Gërvalla.

This roundtable was attended by SEEU students, whom Minister Gërvalla invited to apply for internships in this ministry, to see closely the functioning of Kosovo diplomacy.