A panel discussion on International Women's Day was held at SEEU

On the occasion of International Women's Day today (March 8, 2022), the SEEU Student Parliament and Association, at SEEU campus in Tetovo, organized a panel discussion on the topic: "Women are real architects of society." 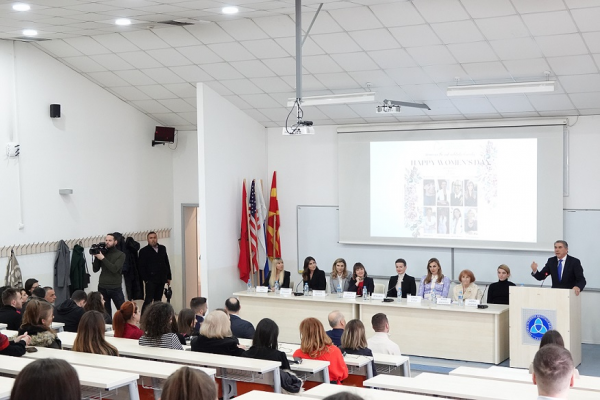 On this topic, in front of the students spoke, successful women in their professions, such as: Pro-Rector for International Cooperation and Research, Prof. Dr. Besa Arifi, former Minister of Education, Mila Carovska, Director of the REA Center, Qanije Selimi, Chairwoman of the Women's Forum, Xhane Kreshova, Flora Shabani, Vlora Akiki, Sabina Memishi and Zamira Bexheti Zylbeari.

In his opening speech, the Rector of the South East European University, Acad. Prof. Dr. Abdylmenaf Bexheti, congratulated all women on March 8, with the desire that women’s progress be developed in all aspects, based on merit, regardless of gender.

"Women at South East European University are represented with dignity from the lowest level of management to the highest level, not because they are women, but because they have proven themselves for those positions according to their merits and abilities" said Rector Bexheti.

He also called on women to be more resilient and to come out of indifference and build self-confidence.

"The student structure by gender at SEEU is 51% in favor of women and another important indicator is success, where the percentage of female students with excellent success is significantly higher than men," said Rector Bexheti.

The Pro-Rector, Besa Arfi, said that after completing education, her dream was to realize herself in an institution where women are respected and valued based on skills and merits and I found this at SEEU.

The former Minister, Carovska, recalling the efforts of women for full equality, singled out today's case where men and women are together and where she clearly proves that this university sees gender equality and distinction as an advantage and not a disadvantage.

The other panelists also spoke about their experience, which was attended with great interest by the students and staff present.

For the participants in this panel discussion and females present, the Rector in a symbolic sign gave a flower.