Rector of the South East European University, Acad. Prof. Dr. Abdylmenaf Bexheti, accompanied by members of the management, today (30.12.2021), held the traditional press conference with journalists on the occasion of the end of year holidays. 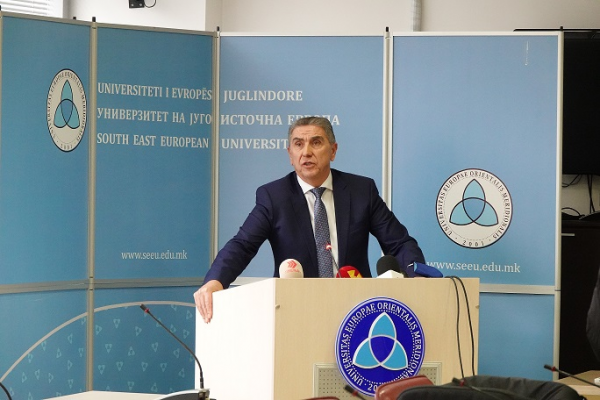 SEEU in this pandemic year managed to continue and advance the previously established success and fortunately after three semesters we were able to hold the dominant part of the lectures with physical presence and physical participation of students with about 95%, said Rector Bexheti. He described 2021 as very successful, dividing this success into three main points.

"The first point is the record enrolment numbers of new students in this academic year 2021-22. The enrolments have been very successful because it has been spread proportionally in all three cycles. If we look at it by regional and linguistic distribution, proportionally, 2/3 of the students are registered on the Tetovo campus and 1/3 on the Skopje campus. Regarding language distribution, 72% of new students study in Albanian, 8% in Macedonian and 20% in English. Gender distribution is also very significant, where 52% of students are female and 48% male. The second point concerns the progress in scientific publications in relevant journals, dominating those with impact factors, by increasing the number constantly. We have an increase in the number of implemented projects. The third point is the implementation projects supported by external donors. We have a return of donors’ interest in SEEU, especially in project financing. Currently in this regard we have two projects, iCane and NextSkills supported by international donors, local government institutions and central government institutions", said Rector Bexheti

Regarding other achievements, Rector Bexheti, especially referred to the extraordinary results of the Technology Park. He said that we have had 68 start-up companies, where 203 new jobs have been created and the financial turnover of the Park is about 2.5 million euros.

Regarding internationalization, Rector Bexheti said that this year for the first time this component took real shape with the arrival of a group of students from Tajikistan and Pakistan, who study in English and all have US-funded scholarships i.e. Shams Foundation.

"Construction work will begin in the spring of 2022. Very soon these days, as soon as we have reached an agreement, the entire Local Economic Development Sector, i.e., 32 employees, will be transferred to SEEU premises. This means creating the much-needed triangle of cooperation between academia, higher education institutions, science, the business community and the municipal community.", noted Rector Bexheti.

Rector Bexheti paid special attention to the expansion of the study-program offer with the opening of a new faculty, i.e., the sixth faculty, which will be the Faculty of Health Sciences, with three-year professional studies, two directions, nursing and physiotherapy.

“We have currently prepared all the documentation and received the approval on the SEEU Statutory changes from the Government and the Board. Today is on the agenda of the Government also the approval of the report for the opening of the new SEEU academic unit and if things go as they have worked so far, in the new Call for student enrollment for the next academic year, we will have the program offer from this faculty.", said among other things the Rector of the South East European University, at the press conference.