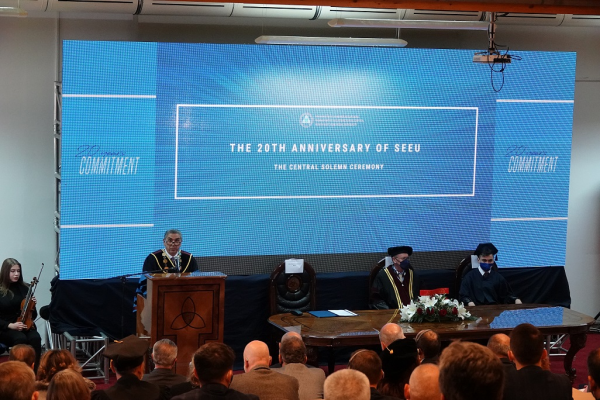 The ceremony was attended by: US Ambassador to North Macedonia-Kate Byrnes, Head of the EU Delegation-David Geer, Head of the OSCE Mission-Clemens Koja, Minister of Education and Science -Mila Carovska, Minister of Finance-Fatmir Besimi, Minister of Environment and Spatial Planning-Naser Nuredini, Mayor of Tetova-Bilall Kasami, Mayor of Çair-Visar Ganiu, representatives of regulatory bodies in higher education in North Macedonia, rectors and business community representatives and other important guests.

Rector of South East European University, Acad. Prof. Dr. Abdylmenaf Bexheti, said that November is a prominent month in the history of our community. It is a time when important national dates are marked. Today, we celebrate the 20th Anniversary of the foundation of our University and, two days later, we will mark the 113th Anniversary of the Unified Alphabet of the Albanian Language. These are two significant holidays, and they are inevitably linked with each other; the University is the Temple of Higher Education and the Day of the Alphabet is the foundation of our national intellectualism and culture.

In his address speech, Rector Bexheti singled out the objectives and the path of the University in the future and thanked for the continuous support HE institutions, with special emphasis on the Ministry of Education and Science, the Ministry of Finance, HE regulatory and supervisory bodies, tireless international donors—whom once again we all publicly thank—we will continue our commitment to quality standards, market flexibility, multicultural values, permanent internationalization and digitalization, inter-university cooperation at home and abroad, always relying on the principle of competition in cooperation.

“Today we mark the 20th anniversary of the founding of the first university in the Republic of North Macedonia, formed according to a unique model of public-private partnership and is a model not only in the country but also in the wider region.. This anniversary is important for you as an academic community, but also important for the state" said the Minister of Education and Science-Mila Carovska.

"It is a pleasure for me to participate on behalf of the United States to celebrate this anniversary together. This week is also International Education Week, a perfect moment to highlight the strong relationship that has existed since the founding of South East European University and the US ", said in her speech, the US Ambassador to North Macedonia, Kate Byrnes.

Laureate for Doctor Honoris Causa, Paul Foster, thanked Rector Bexheti, with whom he said that he has cooperated intensively for these 20 years.

"I am pleased to see SEEU in such good circumstances and I am confident that under your leadership, the university will continue to grow", said Prof. Dr. Paul Foster.

On the occasion of the 20th anniversary, in a sign of gratitude to state institutions, to the main donor embassies, collaborating companies and personalities who have contributed to the development of the University, SEEU awarded recognitions and plaques.