As part of debates for marking the 20th Anniversary of the signing of the Ohrid Framework Agreement, on 11th August 2021, at the South East European University in Tetovo, a panel discussion on the topic: “After two decades, is OFA a narrow framework for fully open and equal society?” was held. 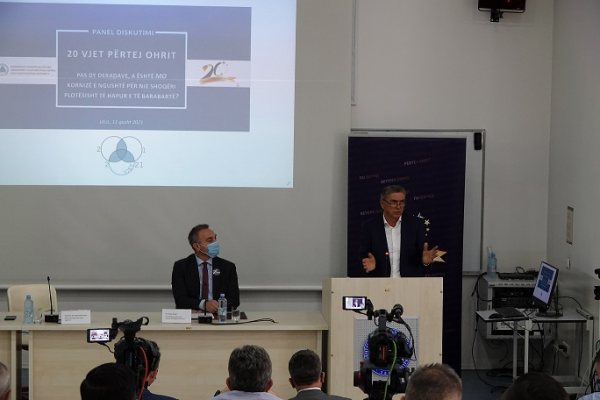 The debate was organized in cooperation with the Ministry of Political System and Inter-Community Relations of RNM and was attended by the Minister of Finance-Fatmir Besimi; the Minister of Environment and Spatial Planning-Naser Nuredini; the Minister of Economy-Kreshnik Bekteshi; and the Minister of Information Society and Administration-Jeton Shaqiri, academic staff and students of South East European University.

In the capacity of host, the Rector of the South East European University, Acad. Prof. Dr. Abdylmenaf Bexheti, opened the event. He thanked the First Deputy Prime Minister of the Government of North Macedonia- Dr. Artan Grubi, for the opportunity given to SEEU to be part and contributor in the debates for marking the 20th anniversary of this Agreement.

“If we reflect on the Ohrid Agreement, we will notice that there are three types of assessments. One assessment is that this Agreement largely has been realized, the other that is the nihilistic or negative assessment i.e., that this agreement has failed in many aspects and the more realistic assessment, based on evidence and objective studies, concludes that this agreement has achieved many results in advancing position and the equality of Albanians, but that there are still aspects of it that have not been fully realized” said in his address Rector Bexheti.

By respecting all assessments, the Rector expressed the assessments of the academia and his personal one regarding OFA, by highlighting some aspects of why this Agreement is narrow for equal society. There are three reasons why OFA is considered a narrow framework: the first is the constitutional preamble, which differentiates the holders of sovereignty, into national ones (ethnic Macedonians) and others, where unfortunately Albanians are ranked. The second is the narrow constitutional norm, which causes the need for revisions of laws governing other inter-ethnic relations (such as the use of languages and alike). The third concerns the limited capacity of the consensual system, i.e., the dual voting system.

The First Deputy Prime Minister and Minister of Political System and Inter-Community Relations in the Government of RNM- Dr. Artan Grubi, expressed satisfaction that SEEU is part of the celebrations and debate on the occasion of marking the 20th anniversary of the signing of OFA. He also thanked the academic staff for the contribution, debate and constructive criticism presented in this panel discussion.

"This university has given and gives quality staff to our society and they are an endless guardian of human capacity for the full implementation of the OFA" said Deputy Prime Minister- Grubi.

I use this opportunity, said Grubi, to thank all those men and women who started the process of complete freedom and equality of Albanians in 1991, continued it in 2001 and all those who continued it until today.

"The Ohrid Agreement is a process that has begun, but will never end, as it is an ongoing process, as it is the fight for full equality", said among others Deputy Prime Minister - Grubi.

Dr. Fatmir Besimi -Minister of Finance in the Government of the RNM, presented the economic aspects of fiscal decentralization who described it as a central and main process of OFA. He said that the goal is for about 10% of Gross Domestic Product to pass to local government administration, although currently this figure is about 5%.

In this panel, many academic staff of the University presented their views, who highlighted the successes of OFA, but also presented recommendations, concrete solutions and how some of the delays in the implementation of this agreement can be overcome and to be implemented efficiently.

The Ministers, Naser Nuredini, Kreshnik Bekteshi and Jeton Shaqiri concretely answered the questions and dilemmas presented by the academic staff in this debate.

Students and representatives of the SEEU Student Parliament and Association also participated in the debate with questions.