At SEEU the book "Education in a Fragile Democracy" was promoted

On Wednesday (16th June 2021), organized by the Faculty of Languages, Cultures and Communication in the Library of the South East European University in Tetovo, in front of students and staff, the book "Arsimi në demokracinë e brishtë/Education in a fragile democracy", with author-- Prof. Dr. Bardhyl Musai, was promoted. 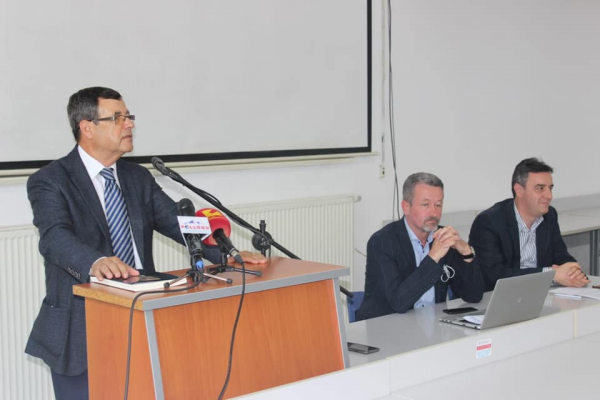 Dean of the Faculty of Languages, Cultures and Communication—Prof. Dr. Demush Bajrami, said that this book is an autobiographical book, followed by a summary of the author's progress and experience in the field of education. "This is evidence of the contribution and modest role that Professor Bardhyl Musai has played in the development of education in the last three decades." According to Prof. Bajrami, the author has written this book to highlight the most dynamic periods of education development after the establishment of democracy, which is still fragile to this day.

Deputy Minister of Education--Prof. Dr. Arafat Shabani said that this book talks about the whole uninterrupted educational career of more than forty years of Prof. Musa, built with effort and sacrifice; during all these years, aiming to outline the life of a non-conformist man, incompatible with the status quo, whose motto of activity was change, without becoming part of the category of "yes persons", noted Prof. Shabani.

The author of the book, Prof. Bardhyl Musai, at the beginning put the emphasis on the valuable work that the South East European University is doing, saying that he is proud to be in the Library of this university, which, as he said, he has mentioned in international conferences as the best Library in the Western Balkans.

Speaking about his book, Prof. Musai said he fulfills several goals at once- "but the most important ones remain the ones that the education sector employees have to achieve: to highlight the achievements and positive experiences, to learn from the mistakes that have been made in the system, but also to serve the institutional memory, as in our governing tradition, unfortunately, everything starts from scratch, as soon as the rotation of power is completed ". According to Prof. Musai, the source of inspiration in the preparation of this book has been hundreds of thousands of people, Albanians and internationals, in Albanian lands and in many countries of the world, whom the author has met in dozens of conferences, seminars, symposiums and round tables. "They have taught me to better understand and respect the complexity of education, in particular- changes in education" said, among others, Prof. Musai.