Graduation ceremony of the seventeenth SEEU generation was held

At South East European University, today (June 12, 2021), the Graduation Ceremony of the seventeenth generation was held. The event was attended by the President of the Parliament of the Republic of North Macedonia, Talat Xhaferri, the Minister of Education and Science, Mila Carovska, the Minister of Finance, Fatmir Besimi and the Ambassador of Slovenia, Milan Predan, as well as many parents and families of SEEU graduates who threw their hats symbolically to mark the completion of the first cycle of their studies. 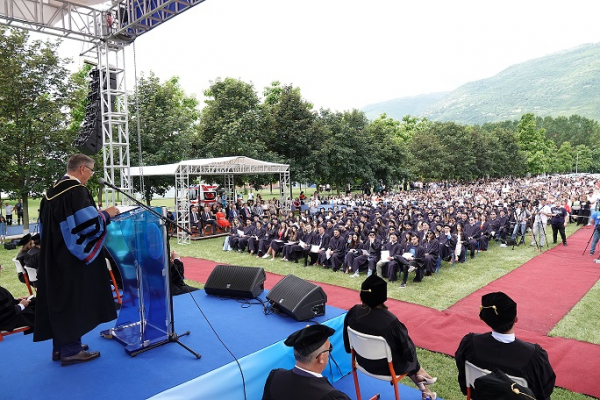 Rector of South East European University, Acad. Prof. Dr. Abdylmenaf Bexheti, expressed his satisfaction for the achievements of graduates so far, appreciating them as the most powerful social, professional and intellectual capital with which this institution contributes intellectually to the society. He said that there is no other project on its own, for these three decades of social, political and economic transition, like SEEU that contributed so much to everyone individually, families and society in general. He assessed that this contribution, in addition to the sacrifices of parents, is primarily dedicated to the international community, but also to all structures of the time that participated in the creation of this Institution.

“Your diploma represents the most credible passport for the Western market, both to continue your academic and professional development, and also to apply in the labor market. I understand, but I do not justify your preference to invade the West at all costs! For those who have the knowledge and the desire, be sure that even here you can earn and live well, especially in the years to come. Today, we are a member of NATO and we have a negotiating status for the EU, which is a good perspective, as well as an opportunity, but also a challenge for increasing quality competition, where knowledge and competencies will be the key to your career success”, noted among others in his address Rector Bexheti.

The Chairman of the SEEU Board, Prof. Dr. Klaus Tochtermann, who participated in the Ceremony through online platform, in his speech to the graduates praised them for their commitment and dedication to study.

“Today is a day that is very important in your life. Today is about you and your future. A significant part of our future will be shaped by digitalization. The COVID-19 pandemic has brought us a huge step forward in this regard. More than ever before, digital skills are needed to manage our everyday work and life. As a highly innovative university, SEEU has recognized this change and responded by offering new study programs with a strong focus on digital skills. Here again we should thank all our donors and the Government for their support”, said the president of the Board Prof. Dr. Klaus Tochtermann.

The President of the Parliament of the Republic of North Macedonia, Talat Xhaferri, addressed the SEEU graduates, who praised SEEU as an institution with intellectual and scientific capacity to face the most difficult challenges of the time.

“You are ready, equipped with knowledge and all skills and abilities that successful students are compared with, to face life challenges that life brings and new and unknown things that you will encounter in your professional life”, noted in his address President of the Parliament, Mr. Talat Xhaferi.

The Minister of Education and Science, Mila Carovska, said that the responsibility of students towards the university does not end here and on this day. They should come back again and again and respond on every request. Simply, the university should and must grow with the current, but also with the already graduated students i.e. alumni.

“It is a common goal of both higher education institutions and institutions of the system that create educational policies and stimulate the development of young people and the realization of their full.” urged the SEEU graduates, Minister Carovska.

The best students of the generation were promoted during the ceremony. Melike Isenova, and Neda Josifovska spoke on their behalf.

For the artistic part of the Ceremony were engaged the artists Nita Reçi, Vullnet Neziri and Arbër Tairi, who especially for this day had prepared two artistic points that were welcomed with excitement by the graduates.

After the end of the Ceremony, the traditional manifestation "Open Day" was held, where potential students, parents and other interested people had the opportunity to get acquainted with the SEEU academic offer for the new academic year 2021-22.

Sports Department and the Student Parliament were engaged for the artistic points and sports activities within "Open Day".

Click on the following link for the Photo Gallery.