Institute for Leadership and Public Policy, today (27th May 2021), in Tetovo, organized a panel discussion, on topic: "Employment and employment opportunities for young people in the country." The main panelists were: the US Ambassador to North Macedonia - H.E. Kate Marie Byrnes, Rector of South East European University - Acad. Prof. Dr. Abdylmenaf Bexheti, the Mayor of Tetova -Teuta Arifi, and the Director of the Employment Agency of North Macedonia - Abdush Demiri. The debate was moderated by Pranvera Kasami, Director of the Institute for Leadership and Public Policy. 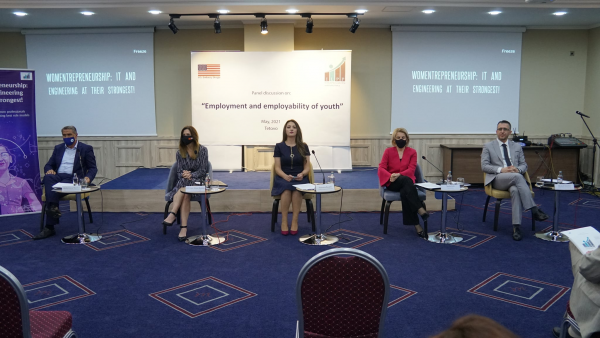 "Macedonia has the highest unemployment rate in the region and is in the second to last place, just before Kosovo. The labor market situation in North Macedonia is asymmetric, especially in the last decade, where there is a discrepancy between what is offered and what is demanded by the labor market. So on the one hand we have high unemployment rates and on the other hand we have employer requirements and lack of profiles they require. The problem is not cyclical in the country's economy, but it is structural” said among others Rector Bexheti.

“SEEU has taken concrete steps in providing the profiles required by the labor market, by horizontally structuring the offer of study programs. Since last year, the Department of Architecture and Design has started to function very successfully, and this year the interdisciplinary study program Energy, Ecology and Economics is offered" noted Rector Bexheti.

He also said that the latest analysis regarding the future professions in North Macedonia show that in the next 10 years over 90% of them will require digital skills. The voices that are against digitalization are strange and this is a very wrong approach.

Regarding the mitigation of unemployment and creation of opportunities for young people, Bexheti said that SEEU assisted by international and local partners, has established two centers that help young people in employment: ICane in Gostivar and Future Skills Jobs on the SEEU campus in Tetovo. Since 2004, SEEU is the first in the region that with the help of USAID and Indiana University has established the Career Center, which assists and pursues student employment.

Many questions were asked by the audience in this debate regarding the creation of employment opportunities for young people.