The well-known Albanian actor and creator, Barjush Mjaku, today (February 3, 2021), visited the South East European University in Tetovo and on this occasion donated some copies of his latest book “Urtësi e Marrëzi” (Wisdom and Insanity) to the SEEU Library "Max van der Stul". The internationally renowned actor, Bajrush Mjaku was received by the Rector Acad. Prof. Dr. Abdylmenaf Bexheti, with whom, in a friendly atmosphere, they exchanged views on educational current issues and theatrical culture also. 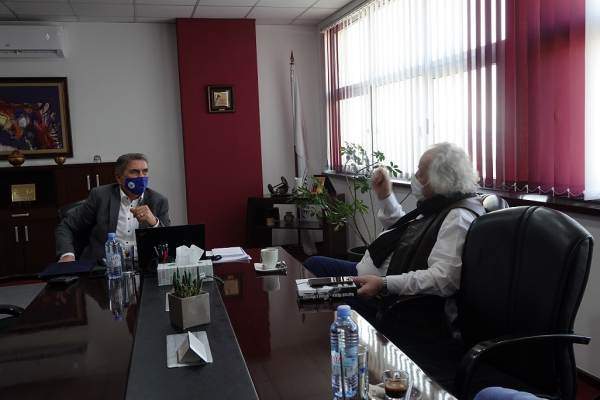 Rector Bexheti in a sign of respect to the actor Bajrush Mjaku awarded Gratitude on behalf of the South East European University as a sign of respect for the donation and for his contribution as a prominent actor of the Albanian theater in general.

“Urtësi dhe Marrësi” is the latest book by Bajrush Mjaku, which has been described as a true monograph of the Albanian Theater in Skopje, but also as an autobiography of the author, who fanatically has preserved all documents and has recorded all the events of his work in this theater and beyond.