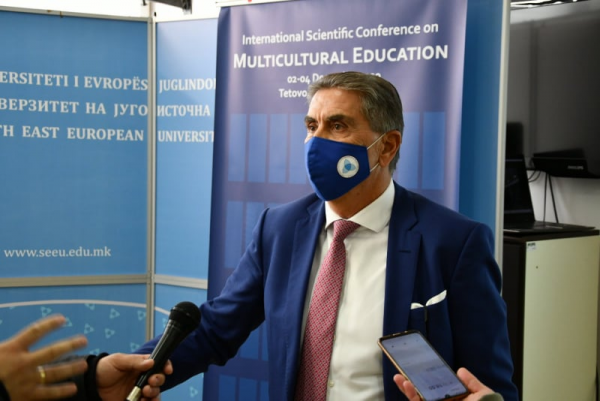 The introductory speech was given by the Rector of the South East European University, Acad. Prof. Dr. Abdylmenaf Bexheti, who spoke about the importance of multiculturalism in university settings and the multicultural context of SEEU.

In this context, Rector Bexheti mentioned examples that distinguish SEEU from other institutions, but also the challenges it faces during the implementation of multiethnic education.

"It is very difficult to run an educational institution in the context of Balkan societies, where there are divisions and prejudices. All institutions should make efforts to reflect and implement the multiethnic and multicultural character of the country" noted Rector Bexheti.

Director of the Center for Balkan Cooperation LOJA, Bujar Luma, stressed the activities to be carried out during the conference and its final goals.

"Through this conference we want to share good practices from real actors in the implementation of multicultural education and receive feedback on how and how this type of education is implemented in higher education institutions."

The aim of the conference is to explore the ways in which multicultural education works in other contexts, to create a platform where recent developments among scholars can be discussed and to give a push to academics, researchers, practitioners, and students to share their best practices and lessons learned on the topic.

The conference was attended by international experts and ambassadors also.