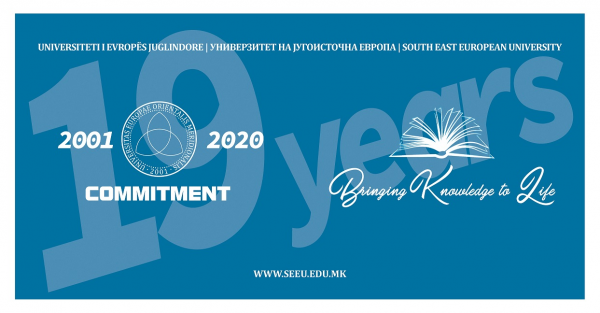 Due to measures and recommendations given by the state health authorities, South East European University, this year has to mark the 19th anniversary of its establishment in the online format. The traditional program, which is held every year in order to mark the University anniversaries, will not be held this year. However, the commemoration of anniversary is being noticed in all our activities though reduced physical, but with a lot of festive energy in the online format.

For the history and symbolism of the anniversary of the establishment of the University and for current issues at the University, you will be able to follow the Video Message of the Rector, Acad. Prof. Dr. Abdylmenaf Bexheti, addressed to students, staff, stakeholders and general public.

On the following link is a promotional video prepared by the Marketing and Promotion Office, especially for the 19th anniversary of SEEU.

The University has already entered the second year of ‘maturity’ we continue to transmit and distribute quality knowledge, which is proven every day by the successes of our Alumni.