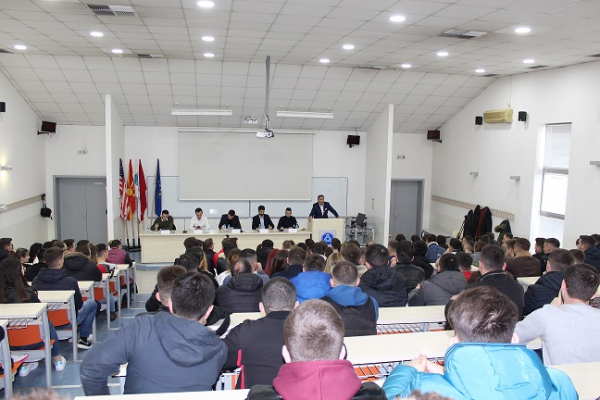 The Rector of South East European University, Acad. Prof. Dr. Abdylmenaf Bexheti congratulated the Debate Club for the initiative by encouraging students to be involved in debates about issues that affect present and their future also. These topics are of vital importance and overcome partisan frameworks and daily political differences.

“Most young people emigrate not only because of economic conditions, but because they want a sustainable and healthy ecosystem, a better health care system, better public services and more equal treatment” said Rector Bexheti.

Presidents of Youth Forums presented part of political programs on how they think to prevent youth migration from the country.

Students and representatives of political parties held a debate where students presented their opinions and asked questions on how to solve the problem of youth migration.

The Debate Club lead by Anila Pajaziti and President of the Student Parliament and Association, Agron Demiri were the initiators for organizing this debate with political parties youth forums, with the aim SEEU students to confront with the opinion of young people involved in politics.