Agron Demiri the voice of every student at SEEU

Agron Demiri is a student of the Faculty of Languages, Cultures and Communication got the confidence to lead the student organization of the South East European University--the Student Parliament and Association, after the last student elections. 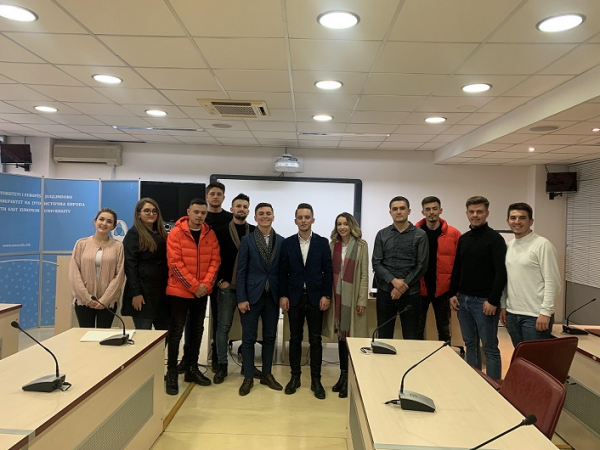 “Each duty has its own responsibilities, but being student myself I think it will be easier to solve problems and to be the voice of every student at this University. I will be critical to any injustice that can happen to students and I will never allow such a thing to happen. I invite students to be critical to us the Student Parliament if they see that our actions are not in their interest” says Demiri.

The Student Parliament itself includes many other sectors, which are mainly aimed massively to activate students and utilizing their creative potential in order to have the greatest impact in all aspects of student functioning.

The president of SEEU Student Parliament says that he has created a good team that has the potential and above all is willing to work and serve the association and students. Also, cooperation with the University bodies in the interest of the students will be one of Agron Demir's priorities.

Cooperation with other similar associations in the country and beyond will also be one of the goals of President Demiri and the Student Parliament and Association.

“I am planning to meet with other associations and I will try to find a common language to carry out projects with them. I have also pointed out in the Action Plan that cooperation with student parliaments, various non-governmental organizations and various clubs from the country or abroad will undoubtedly be primary during my term in office as president ” evaluates Demiri.

Student Parliament and Association, and Student Ombudsperson are the two main bodies that protect the interests of students at SEEU.