Public debate on the digitization of public services was held

Within the public debate on "Digitization of public services", the Ministry of Information Society and Administration on Monday (27th January 2020), at South East European University presented the project "With one click, to all your services". 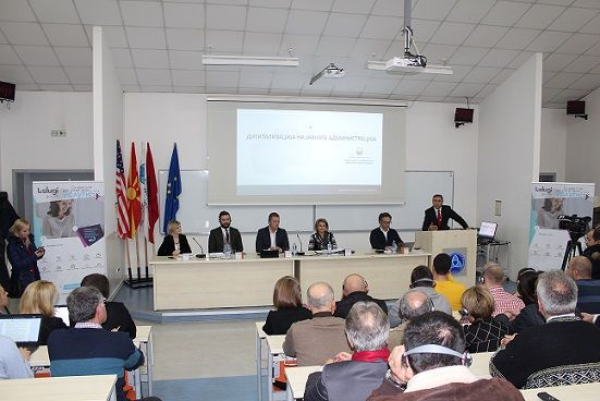 The debate focused on the digitalization of the country, as well as on its role in the professionalization of public administration, and speakers at the debate were Minister of Information Society and Administration Damjan Mançevski, the Mayor of the Municipality of Tetova, Teuta Arifi, Prof. Dr. Azir Aliu as representative of the academic community and Boban Milosavleski as representative of the business community.

The Rector of South East European University, Acad. Prof. Dr. Abdylmenaf Bexheti in his address said that this University is the most appropriate and symbolic place to convey the message of digitalization of the country. We are the first institution not only in the country but also in the region that have implemented digitalization in practice.

“This university is the first institution in the country that implemented the electronic index and is the initiator of many platforms and applications for digitization of teaching" said Rector Bexheti.

Minister Damjan Mançevski introduced the digital platform for public services uslugi.gov.mk and announced the complete digitization of the administration.

Mayor of the Municipality of Tetova Teuta Arifi spoke about cooperation between central and local government in order to provide citizens with quality and timely services.

The debate at the South East European University was the second in a series of public debates expected to take place in the country's major cities.