Cleveringa Lecture for the first time was held in North Macedonia

At South East European University, today (28th November 2019), for the first time in North Macedonia, Cleveringa Lecture was held by Prof. Pinar Ölçer, from Leiden University. The lecture was organized at the initiative of the Dutch Embassy. 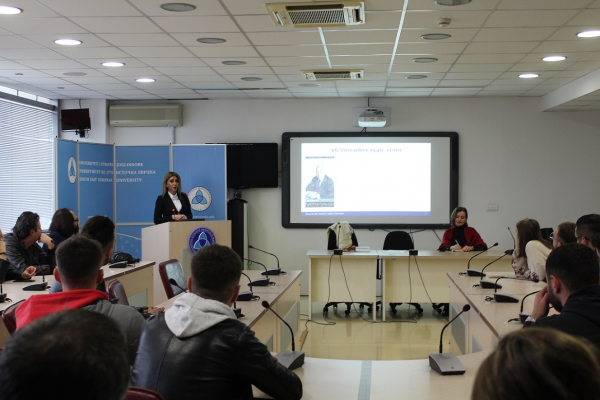 Prof. Pinar Ölçer, said the Cleveringa Lecture is a form of protest lecture based on strong legal arguments. She said that Prof. Robert Cleveringa at the time of the Dutch occupation by Nazi Germany in sign of protest delivered a speech argument against dismissal and deportation of his colleague of Jewish ethnic origin, by the Nazi regime. This lecture was supported by students who refused to attend classes and consequently Prof. Cleveringa was arrested several times and the Leiden University was closed.

The Cleveringa lecture is about the model of justice and the possibility of defending everyone from the charges and that s/he has the right to be informed and have sufficient time to organize the defense in front of the competent authorities. No one can be convicted as long as there is no final verdict for his/her guiltiness.

SEEU Pro-Rector for Research and International Cooperation, Prof. Dr. Besa Arifi, said that the Cleveringa lecture for the first time was held at the Leiden University, by Prof. Robert Cleveringa and because of the importance of the action, the force of argument and the influence it had at that time, it continued to be held in several states around the world. She thanked the Embassy of the Kingdom of the Netherlands for the opportunity for such a lecture to be held for the first time in North Macedonia and exactly at SEEU.