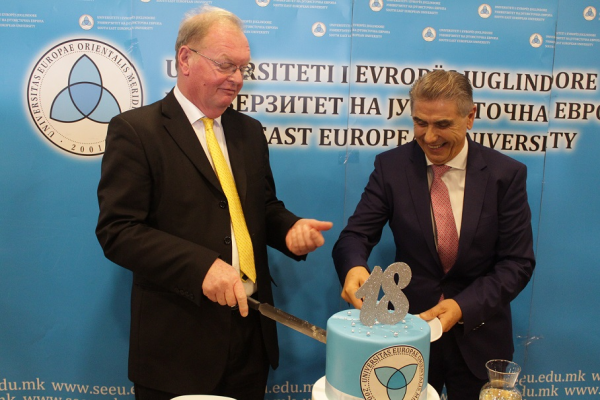 “November is a prominent month in the history of our community. It is a time when important national dates are marked. Today, we celebrate the 18th Anniversary of the foundation of our University and tomorrow we will mark the 111th Anniversary of the Unified Alphabet of the Albanian Language. These are two significant holidays, and they are inevitably linked with each other; the University is the Temple of Higher Education and the Day of the Alphabet is a foundation of our national intellect and culture”, said in his speech, the Rector of the South East European University, Acad. Prof. Dr. Abdylmenaf Bexheti .

Speaking about the latest developments in the University, Rector Bexheti said that the University has managed to stop the decreasing trend of student enrolments that we have experienced for nearly a full decade.

"This is the second academic year with a 10% student increase in the first cycle of studies, with even a 7% increase compared to last year. Cumulatively, for two academic years, there is a 20% increase, despite all the downward trends due to birth rates and emigration"said Rector Bexheti.

In his address, the Rector thanked US taxpayers for the support provided through strategic partner Indiana University and projects implemented in cooperation with USAID.

“The culture of permanent change in academic programs, including management changes, is based on the principle of combining excellence and relevance. This also determines the course of our four-pillar trajectory: overall quality, internationalization, excellence in teaching and research, and institutional identity”, noted Rector Bexheti.

“We will continue our commitment to quality standards, market flexibility, multicultural values, permanent internationalization and digitalization, inter-university cooperation at home and abroad, always relying on our hard work, and hoping for institutional support, both from international and domestic ones” said among other things Rector Abdylmenaf Bexheti, at this solemn manifestation.

In his address, the President of the University Board, Prof. Dr. Denis Farrington evoked memories from the day when the University was founded and the circumstances in which it was created and that everyone was enthusiastic about this project.

Concerning the future of the University, the President of the University Board, Prof. Dr. Denis Farrington said that: “We also see ourselves not as a separate entity competing with other institutions to succeed according to narrowly-defined national criteria, but as integral parts of local learning ecologies deeply embedded in, and accountable to, the communities they serve. I believe in that respect we serve the Republic of North Macedonia and Kosovo and their economies well, as the success of our alumni demonstrate”.

During the celebration of the anniversary of the University, the 26 PhD candidates were also promoted, who symbolically received their diplomas from the Rector.

For the artistic part of the ceremony the Choir of University of Tetovo led by conductor Prof. Dr. Arifikmet Xhemaili was engaged, as was a well the string trio from Skopje.