The South East European University staff team won the Memorial Tournament “Arben Xhaferi Cup” that was held yesterday (19 November 2019) at the Medical High School Sports Hall. The tournament was organized as part of activities to mark the 18th Anniversary of SEEU establishment. There were four teams participating in this tournament: “SEEU”, “Municipality of Tetova-NPK”, “Ecolog” and the team consisted of high school professors in Tetovo. 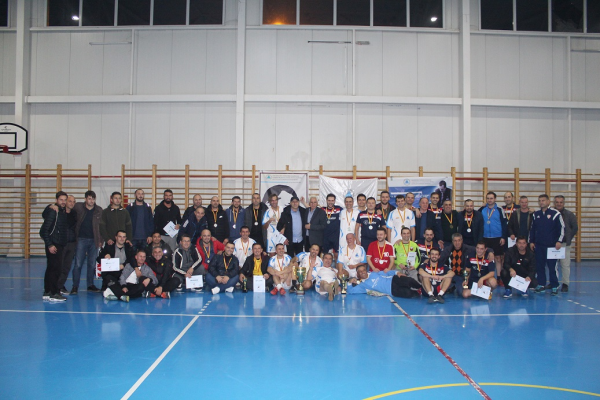 The tournament was officially announced opened by the President of the SEEU Board, Prof. Dr. Denis Farrington, who expressed satisfaction with the participation of the teams in this tournament. He evoked a moment when he was challenged for a chess game with Arben Xhaferi and added that he did not accept the challenge because he knew that he would have lost it.

Prof. Dr. Vebi Bexheti spoke about the importance of this memorial tournament and figure of Arben Xhaferi, who said that: “besides politics, Arben Xhaferi was also a man who loved sports and he was a good sportsman”.

All matches were held in a festive atmosphere and after SEEU, the team of “Ecolog” was second, "Municipality of Tetova-NPK" won third place and the team consisted of high school professors in Tetovo won fourth place.

Certificates, cups and medals were awarded to all participating teams.