Working visit and lecture by Ambassador Byrnes: SEEU is the one of the most influential university in North Macedonia 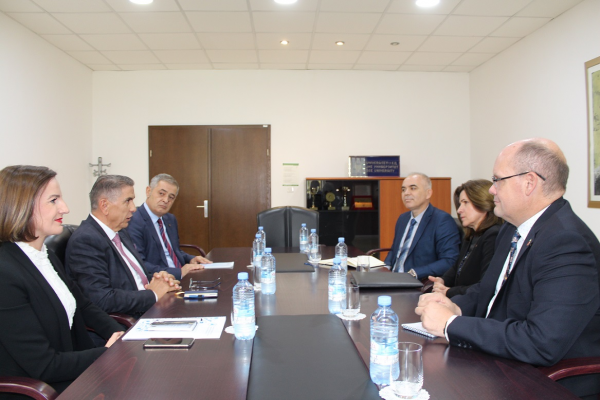 Prior to her lecture Ambassador Byrnes had a meeting with the Rector, Acad. Prof. Dr. Abdylmenaf Bexheti and pro-rectors Prof. Dr. Besa Arifi and Prof. Dr. Vladimir Radevski.

At the briefing meeting, Rector Bexheti informed the US Ambassador about the progress made by the institution, strategic partner visits, and the upcoming visits from USAID Headquarters in Washington. Other topics included forms and means of continuing US cooperation and support.

“From the beginning, the United States has continued to partner closely with SEEU, via direct support from our government as well as through partnerships with American universities. SEEU has become one of the most important and influential universities in the country and its graduates are among the most successful leaders in business, academia, and public service in all of North Macedonia ,” said Ambassador Byrnes.

“Universities like SEEU have been critical to the reform efforts being made in North Macedonia,” the Ambassador added.

Speaking about the latest developments in the country, she urged students not to covet material goods and considering leaving because good days are coming for North Macedonia. She urged them to be part of the process of change.

“The future belongs to you and the United States will be a partner with you and your country” said the Ambassador.

At the end of the lecture, students asked various questions about the role of the US in the region and the priorities of her mandate as the US Ambassador to North Macedonia.

After the lecture, Ambassador Byrnes attended the official opening of the campus Legal Clinic, which is supported by the US Embassy.

The Rector of South East European University, Prof. Dr. Abdylmenaf Bexheti, thanked the American taxpayers, who have allocated funds to help in the realization of this project, which is not the first and will not be the last.

“Most of our academic staff have stayed in the US for studies and training at partner universities and have brought the pragmatic approach in teaching and learning here. This has led students to perceive a difference and to study at our University, which this year notes an increase of 10% in the number of new enrolled students” the Rector said.

The Pro-Rector for International Cooperation and Research, Prof. Dr. Besa Arifi, thanked the US and the Embassy in Skopje for all the commitment and support provided for the opening of the Legal Clinic. She also thanked the staff of the Faculty of Law and the representatives of the US Embassy, who have worked hard to make the Legal Clinic project a reality.

The Dean of the Faculty of Law, Prof. Dr. Adnan Jashari, said that he feels very privileged that SEEU welcomes the ambassador of a state that has constantly helped us. He said the SEEU Law Clinic is the first in the region and aims to be a center where students can practice what they learn in theory.