The conference on Multilingualism as a Challenge of a Linguistic, Literary and Cultural Communication was held

Organized by the Faculty of Languages, Cultures and Communication, on Thursday (19 September 2019), at the South East European University in Tetovo” was held the International Scientific Conference on topic: “Multilingualism as a Challenge of a Linguistic, Literary and Cultural Communication.” 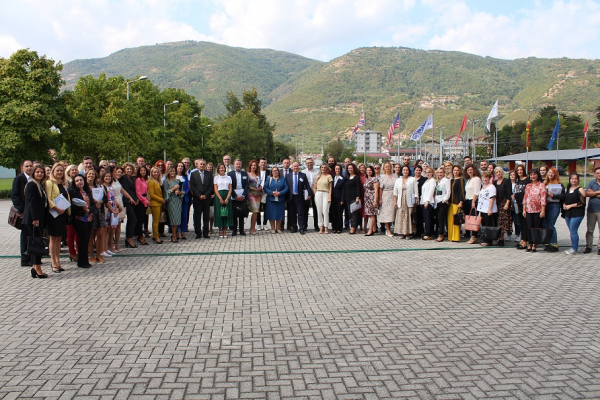 The purpose of the conference was to tackle multilingualism issues through scientific work and research, providing concrete solutions to problems for implementation in the country.

On behalf of the Rector of the South East European University Acad. Prof. Dr. Abdylmenaf Bexheti, the conference was declared open by the Pro-Rector for Academic Planning and Digitalization, Prof. Dr. Vlladimir Radevski, who read the Rector's speech in Albanian.

“South East European University has pioneered the role of providing quality teaching in higher education in all three languages in the Republic of Northern Macedonia, but also in functioning as an institution in three languages. Wishing you fruitful and successful work, I wish to strengthen the contacts, increase the cooperation between the institutions from where you come from, more projects and joint collaborations, in order to have even more conferences" it was noted in the addressed of Rector Bexheti to the conference audience.

Pro-Rector for Academic Planning and Digitalization Prof. Dr. Vlladimir Radevski, in his speech he emphasized that in our society, multilingualism is not only a fact, but also a challenge before which new topics are opened every day and there is a need for research and expertise.

“In Europe we have more and more examples of multilingualism support, which we must follow and be inspired by. The policies and direction of the European Commission for Digitization are financially supported by the funds that are available to the scientific and research community” said Pro-Rector Radevski.

Keynote speeches were given by Prof. Dr. Andrew Goodspeed, from Faculty LCC and Shefkije Islamaj, from the Albanological Institute of Prishtina. The conference coordinator was Doc. Dr. Meral Shehabi.

The conference continues its work on sessions where will be treated topics from the field of communication, linguistics, literature and methodology in Albanian, Macedonian, English and German language.