On Thursday (11 July 2019), in Tetovo, the South East European University and the Secretariat for European Affairs, signed a Memorandum of Cooperation. The purpose of this Memorandum is to increase the ability of both parties to exercise their competences in accordance with the Euro-Atlantic commitments, Laws and strategic documents of the Government of the Republic of North Macedonia. 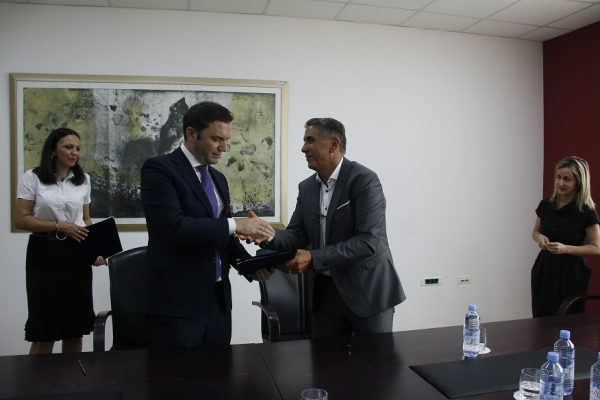 The memorandum was signed by the Rector of SEEU, Academic Prof. Dr. Abdylmenaf Bexheti and Deputy Prime Minister for European Affairs in the Government of the Republic of North Macedonia, Bujar Osmani.

Rector Bexheti expressed his satisfaction that the Government welcomed the initiative to concretize the cooperation started two months ago.

"SEEU proves its readiness to take social responsibility and to contribute to the two very important processes for the country, assisting in organizing trainings for administration and linguistic editing of all legal acts of the country," said Rector Bexheti.

Deputy Prime Minister Osmani considered South East European University as the most credible and serious institution to be the carrier of the country's integration processes.

"The memorandum has a multidimensional character and foresees that experts from this university to be included in the negotiations," said Osmani.

The Memorandum aims to establish cooperation between the two sides in aligning with the EU and involving the academic community in various forms of cooperation and partnership in the European integration process.

The signatory parties will be committed in organizing various seminars and trainings to improve the skills of administrative officials in the area of IPA funds and terminological reviews of all Laws and other legal acts that are published in the Official Gazette of the Republic of North Macedonia.