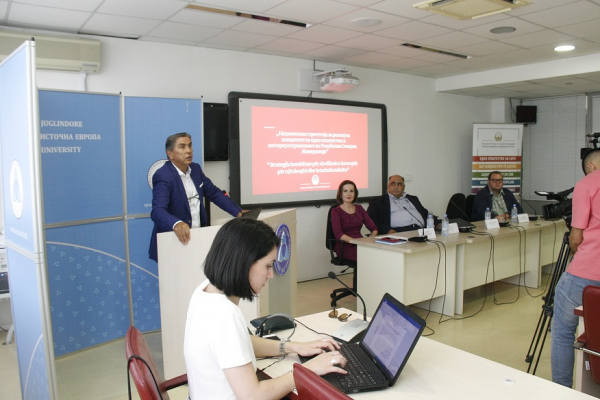 “This is the most appropriate debate is the most appropriate place, as it matches the concept and mission of our University. We can easily understand each other at the academic and managerial level, by respecting one another through the implementation of the concept of flexible use of languages. Use of languages and respect for the other requires investment and we have done so. Therefore, our recommendations and suggestions in writing will be sent to the Government in order to be taken into account during the adoption of the Strategy” said among others Rector Bexheti.

The MP-Rubin Zemun said that “we have gone through various social systems, ranging from total denial - to the civic concept. The idea of the Strategy is to be more inclusive and the state to play a more active role in fostering interculturalism and to create mechanisms to protect this concept.”

The SEEU Pro-Rector for Research and International Cooperation, Besa Arifi emphasized the role of SEEU as a typical example of multi-ethnic, multicultural and functional institution.

“For the first time is presented a strategy which has action plan and time frame. We are ready concretely to contribute to this action with our model and expertise” said Pro-Rector Arifi.

In the discussion with concrete examples were included the President of SEEU Senate -Prof. Dr. Jonuz Abdullai, Dean of the Faculty of Law-Prof. Dr. Adnan Jashari, Prof. Dr. Ali Pajaziti and as well as other participants.