The publicist, politician and journalist--Mahi Nesimi, on Wednesday (12 June 2019) at South East European University promoted his fifth book "Albanians from Macedonia and the Future of the State". Present in this event were former politicians, ambassadors, publicists, colleagues, university staff and other guests. 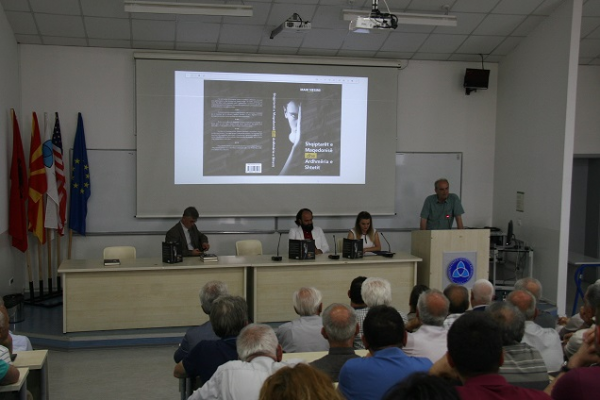 “As a host, I feel proud for the promotion of this book, not just about its values, but also for the fact that the book will serve to our students in political science as reference literature in their works”, said the Rector of SEEU, Acad. Prof. Dr. Abdylmenaf Bexheti.

“The book presents a monograph of the political action of Albanians in Macedonia, and the author has tried that arguments and facts to dominate, and not qualifications and evaluations" noted among others Rector Bexheti.

The author of the book, Mahi Nesimi, said that the intention to write this book was to complete the lack of written documents for important events of Albanians in Macedonia.

“We Albanians in Macedonia have done very little to leave written documents about important events of our history here. The book includes events from 2001 until the present moment, where the main events are argued and the forbidden themes are described and discussed, such as the issue of cantons, the Ohrid Agreement, population census, the project "Skopje 2014" and the recent Law on the use of the Albanian language", said among other things the author Mahi Nesimi.

For the book spoke the editors Prof. Dr. Zemri Elezi and Prof. Dr. Jeton Shasivari, while many of the guests had comments and made conversation with the author.