On Monday (May 27th, 2019), the Feminist Club that functions within the Student Parliament and Association, at the debate held at SEEU, presented some of the results of the project entitled "Gender discrimination in secondary and higher education”. 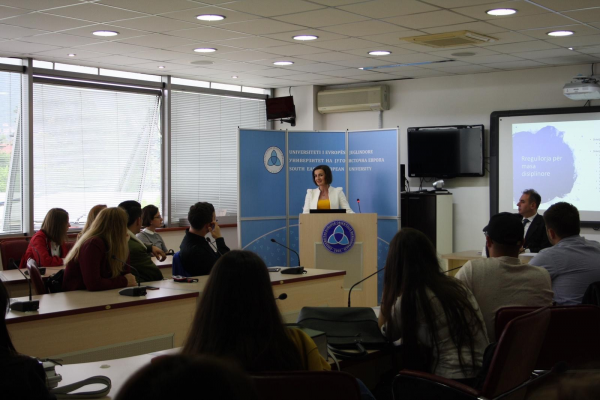 The presentation was organized within the framework of the round table on the same topic where panelists were Prof. Dr. Besa Arifi, Ahmed Qazimi and Safet Neziri.

The Feminist club presented data from their research on gender discrimination, where students from three universities responded. According to the explanation of the representatives of this club, respondents were asked among others about the form of gender discrimination they face. Respondents mentioned some instances of misuse of position and relationship professor-student, among other was mentioned the form of sexual favors in exchange for grade.

South East European University is ready to investigate any possible case of this nature, but at the same time emphasizes that first must verify the trustworthiness of research methods and results presented.

South East European University encourages students to report any case having to do with any kind of misuse at the university.

For this reason, any such reporting will be considered with the utmost seriousness, but this should be done by verifying the facts and by accordingly respecting the dignity and privacy of all parties involved. The University within its rules and policies has foreseen a number of legal and administrative mechanisms for protection against discrimination and various abuses which is willing to implement at any time. University so far has not received any complaints of such violation for any professor.