Bujar Osmani: SEEU is the main pillar of the expertise in the process of integration of North Macedonia

"You, as a European university, are the main pillar of expertise in the process of North Macedonia's integration into the EU," said Deputy Prime Minister of RNM committed to European Affairs, Bujar Osmani. Minister Osmani spoke on Thursday (16 May 2019) in a lecture for students of South East European University in Tetovo, on the topic of "Integration into the EU". He said that he had previously met with Rector Acad. Prof. Dr. Abdylmenaf Bexheti, with whom he discussed engaging experts as key resources in professional teams, as an expression of his high appreciation for the expertise of the staff of South East European University. 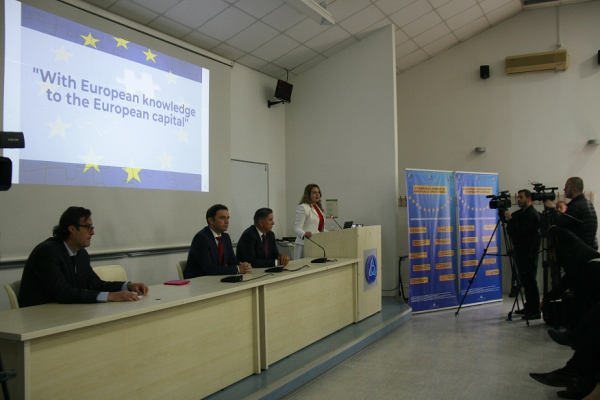 Deputy Prime Minister Osmani also presented the Secretariat's project for conducting an essay competition entitled "With European knowledge to the European Capital", which will be held in all public and private public universities, such as SEEU. From each university two students will be selected who will visit European institutions in Brussels and Strasbourg.

“The full integration of our country into the EU is not an option, but a necessity. Only EU integration can prevent the massive escape of the population. These phenomena are inversely related to each other, in the sense that closer the country is to integration, the immigration rate decreases and vice versa,” said Rector Bexheti.

“The EU should not be hesitant in the enlargement process because recent geostrategic developments in the Balkans show an increase in political and economic influences from eastern countries, such as Russia and China” Rector Bexheti added.