At SEEU a debate on World Press Day was held

Well known journalists were part of the panel debate on topic “Free Press - a key factor in the development of a democratic society” that was held on Monday (May 6, 2019) at South East European University on the occasion of the World Press Day. The panel was organized by the Faculty of Culture and Communication - Department of Communication Sciences. 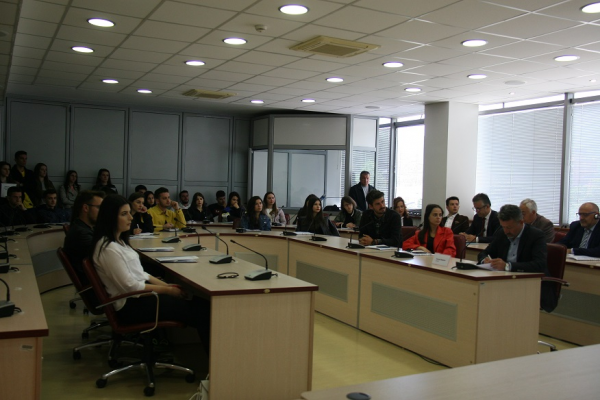 The panellists were: Harun Ibrahimi, Sasho Ordanovski, Migena Gorenca and Ismail Sinani, while after the presentation students of the International Communication and members of the Feminist Club from Student Parliament participated in the debate.

Rector of South East European University, Acad. Prof. Dr. Abdylmenaf Bexheti in his opening remarks said that freedom of media is fundamental for the functioning of a democratic society.

“Freedom of media is not just rhetoric, but also represents the influence that the media have in democratic societies. With powerful media we provide institutional functionality” said Rector Bexheti.

Doc. Dr. Demush Bajrami, Pro-dean of the Faculty of Languages, Cultures and Communication, spoke about the importance of media freedom and that by marking this day with the presence of such well-known journalists we give an added value to the importance of this day.

The general opinion was that in North Macedonia there improvements, but media freedom is still problematic and that the media are independent, but with filtering.