The public debate "Let's Talk about Taxes", organized by the Friedrich Ebert Foundation and the Ministry of Finance of the Republic of North Macedonia, was held on Wednesday (17th April 2019) at the South East European University. 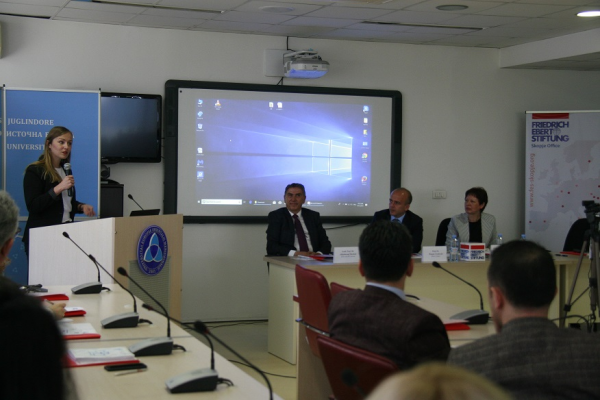 The debate was attended by a large number of students and professors, while their address had: SEEU Rector--Acad. Prof. Dr. Abdylmenaf Bexheti; Director of the Friedrich Ebert Foundation in Skopje Office--Eva Ellereit; Minister of Finance—Prof. Dr. Dragan Tevdovski and Head of the Department for Strategic Planning at the Public Revenue Office--Vesna Srceva.

Rector Bexheti expressed his satisfaction that the South East European University is the host of this debate, because the tax system concerns us all.

“We all are taxpayers and certainly we are interested in more equitable and simpler tax system” said rector Bexheti, who from aspect of experience and vocation took an active part in this debate.

Minister of Finance Dragan Tevdovski said that the aim of Ministry is to raise the level of debate on such a sensitive and important topic for all citizens. He had presentation about tax structure; the way how budget is filled and argued why reforms in the tax system were needed.

Director of the Friedrich Ebert Foundation-Skopje Office, Eva Ellereit said that she feels very privileged to be in Tetovo, at such contemporary university campus. Regarding the debate, she said that a good tax system should be equitable during the distribution.

Head of the Department for Strategic Planning --Vesna Srceva spoke about strategic planning and the role of the Public Revenue Office in the tax system in the Republic of North Macedonia.