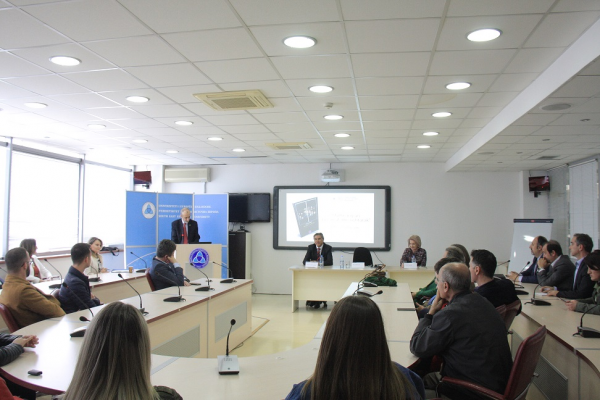 Ambassador Jazbec said he feels very honoured that the promotion of this book is taking place at SEEU, at the University where he teaches as a visiting professor and that students will have the opportunity to learn from it something new and useful about diplomacy and international relations.

“Since the original story is embedded in my book, I want to say it is also the first translation of the story of Martin Krpan into Albanian. Therefore, the translation we present here has a historical significance” said H.E. Jazbec.

The SEEU Rector, Acad. Prof. Dr. Abdylmenaf Bexheti, thanked Ambassador Jazbec for promoting his book at our University. He said that the book is written in a simple language and is very fluid and easy for everyone to understand.

“Through the character of Martin Krpan we see reflected the character and mentality of the Slovenian nation, with which character we are familiar and for which we have great respect here” said Rector Bexheti.

The Mayor of Tetovo, Teuta Arifi, who wrote the foreword of the book, said that the translation of Ambassador Jazbec's book into the Albanian language sounds much the same as the authentic version in the Slovenian language.

“The character of Martin Krpan has its own mythological elements and is similar to the Albanian characters of Romanticism. These elements make Balkan people similar” said Mayor Arifi.

This novel speaks about Milan Krpan, hero of the Slovenian people, and the author offers a challenging analysis of him as a diplomat and warlord.