‘Respect, don't hate’ is the motto of the anti-hate campaign, which, with the initiative of the National Printed Media Association, is taking place in North Macedonia. The campaign aims to sensitize the public against hate speech, which recently has appeared in the country. 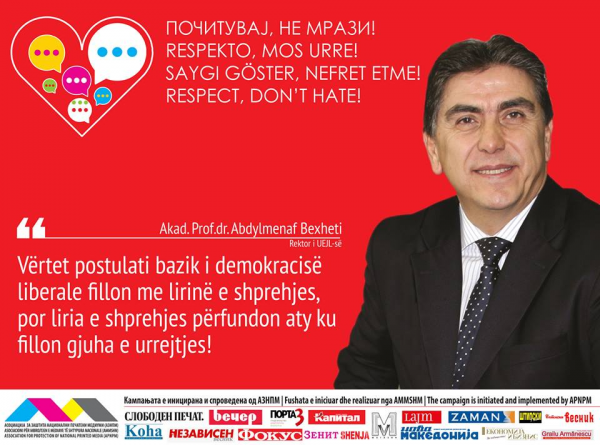 As part of this campaign known personalities from the country give their messages against hate speech, which recently appeared in the media and social networks, especially after the tragic accident on the highway Skopje - Tetovo.

South East European University as bases of its’ operations has the principle of equality, freedom of expression and tolerance. In addition to tolerance, SEEU promotes respect for each other, regardless of ethnicity, race or gender.

Rector of South East European University, Acad. Prof. Dr. Abdylmenaf Bexheti has joint this campaign, who in the sensible poster of the Association has expressed his message for respect for each other and against hate speech.

“Indeed, the postulate of liberal democracy begins with the freedom of speech, but freedom of speech ends where the hate speech begins! ", it is noted in the awareness message of the Rector of SEEU, Academician Abdylmenaf Bexheti.

In this campaign it is expected to join associations, institutions and well known personalities from the country.