“Become a Business Angel - support successful business ideas", was the topic of the forum that was held on Wednesday (27.02.2019), at the SEEU campus in Skopje, this event was organized by CEED Macedonia and South East European University, with the support of the Ministry of Economy of North Macedonia and the Swiss Entrepreneurship Program - SwissEP. 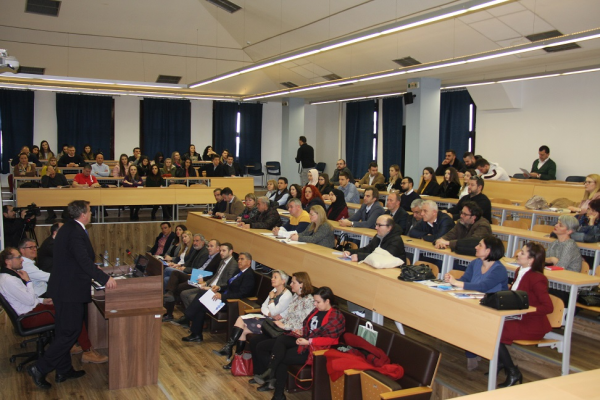 “South East European University with similar initiatives started very early, since its establishment, when it was established the Business Development Centre, which had a similar concept” said the Rector of SEEU, Acad. Prof. Dr. Abdylmenaf Bexheti in his opening remarks. He informed that SEEU is a partner in the realization of one project, where the holder of that project is a university from Greece. Within this project, all innovative student initiatives will be supported.

“This is not a big project, but it is important for students and the symbolism that it represents” said Rector Bexheti. He stressed that in the economic structure of our country there are many cracks that can be fulfilled by business angels.

Swiss Ambassador H.E., Sibel Zuter noted that they as Embassy have established experiences together with USAID that will help affirm the concept of business angels in the country.

On behalf of the Minister of Economy, spoke the State Secretary, Blerim Zllatku, who said that this Ministry has specifically supported projects that stimulate alternative sources of funding.

Minister without Portfolio, Zoran Shapuric, stressed the need for greater affirmation of the business angels’ concept, which affects economic development.

Prof. Dr. Veland Ramadani, presented the concept, about the way of functioning and the impact of business angels have on entrepreneurship development.

Jovan Madjovski, representative of CEED Macedonia, thanked the participants and presented the activities that this organization has carried out.

Regarding the experiences and operation of a business angel, spoke Aron Braun, business angel from the Swiss Business Angels Club.