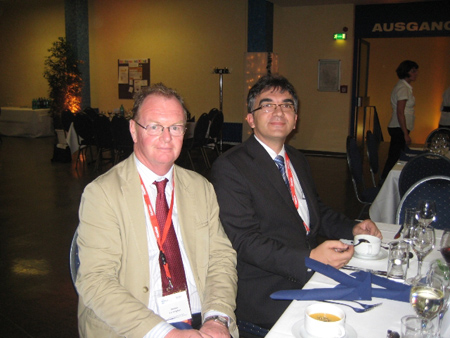 Dr. Dennis Farrington, President of the Board, pictured with the Rector of the University of Montengro,Professor dr Predrag Miranovic, represented SEEU, and was the only representative of R Macedonia at the EUA Autumn Conference 8-10 October in Giessen, Germany, attended by 400 Rectors and other officials from Europe and other parts of the world. The topic of the Conference was 'Internationalisation': considerable discussion took place on the use of languages in promoting international links and mobility, within the European Higher Education Area and beyond.

Dr Farrington presented SEEU's model of 'flexible use of languages' to a discussion group.  “There is obviously a great deal of interest in Europe in promoting second cycle (MA) studies in the English language, with a few examples of first cycle (BA) studies in certain subjects, such as business informatics and computing science. This development is important for countries forming closer links with the EU, such as R Macedonia, and encourages SEEU students to become proficient in English as a gateway to further study”, said Dr. Dennis Farrington.
In addition, the Conference discussed how, in the context of internationalisation, higher education could benefit from broadening its core ethos to include non-Western experience, from Asia, India and Africa, and not rely so much on the influence of the Western European or US systems.