A public debate on the Constitutional changes was held

Representatives of the Government of the Republic of Macedonia, professors and students, on Monday (10.12.2018), participated on the fifth public debate, which was held at the South East European University in Tetovo, where they discussed constitutional amendments, as provided in the Prespa Agreement. 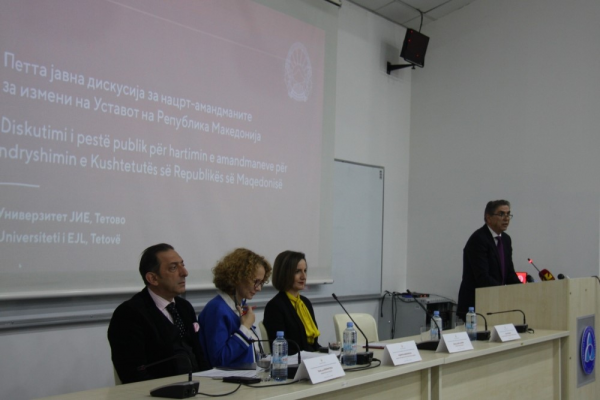 In his opening address, the Rector of South East European University, Acad. Prof. Dr. Abdylmenaf Bexheti said that debates on fundamental issues such as changes in the highest legal and political act of a community are even more important than the simple debates or forums that policymakers should always do when the differences are tangible to many stakeholders.

“NATO membership and approximation to EU, with higher political and democratic standards, soon will impose the need to review many interethnic aspects that are not currently included in these changes" said Rector Bexheti.

Deputy Prime Minister and Minister of Defence Radmila Sekerinska--explained the importance of adopting these changes due to the changes expected to take place in resolving open issues and Macedonia's safe journey to NATO and the EU.

Deputy Prime Minister of the Government of the Republic of Macedonia for European Affairs, Bujar Osmani, spoke about Macedonia's urgent need to integrate into NATO, due to the geostrategic position and the geostrategic moment in which Albanians are in general.

The SEEU Pro-Rector for International Relations and Research, Prof. Dr. Besa Arifi, proposed some concrete suggestions to be incorporated in the amendments for constitutional changes.

Prof. Dr. Blerim Reka, said that Macedonia is at a strategic crossroads where all stakeholders should be satisfied with the aim of realizing the Euro-integration.