On Friday (November 23, 2018), the South East European University, marked 17th anniversary of its establishment. This event was attended by Minister of Education and Science of Macedonia, Arbër Ademi; Rector of Goce Delcev University from Shtip; Vice-Rectors from University of Tetovo and "St. Kliment Ohridski", as well as many other guests. 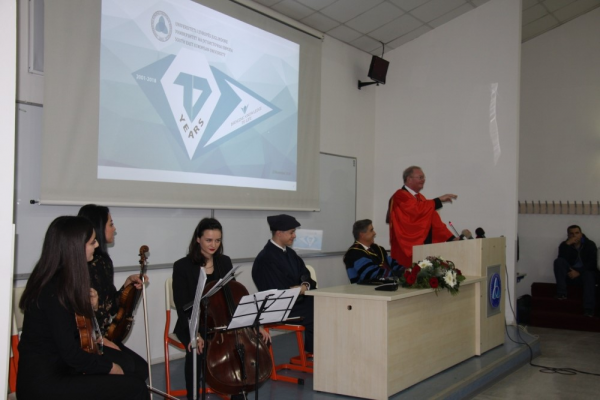 “Today, we celebrate the 17th anniversary of the foundation of our University, and yesterday we marked the 110th anniversary of the Unified Alphabet of the Albanian Language. These are two significant holidays, and they are inevitably linked with each other; the University is the Temple of Higher Education and the Day of the Alphabet as the foundation of our national intellectualism and culture.” said in his address speech Rector Acad. Prof. Dr. Abdylmenaf Bexheti.

Speaking about the University's achievements during the 17 years of existence, Rector Bexheti emphasized the contribution of the two previous rectors, pledging to accomplish the mission of the University and to realize the third phase, sustainability and development on the basis of values and quality differentiation in conditions of a market economy beyond geographical boundaries.

“The concept of the market here is not in the micro-structural context, but in terms of optimization, utilization and development even in the pan-regional aspect, moving towards continuous internationalization.” said Rector Bexheti.

Regarding long-term sustainability, Rector Bexheti stressed the concrete steps that have been taken since the beginning of his mandate.

“After five years of public funding with an absolute flat value and without a fiscal status, thanks to institutional support, first from the Minister of Education and Science and then from the Prime Minister, this academic year we mark a considerable increase of funds, but above all also the status of the regular fiscal entity in the Central State Budget”, said among others Rector Bexheti.

Minister of Education and Science of Macedonia, Arber Ademi said that the South East European University has implemented the idea and vision of the OSCE Commissioner Max van de Stoel.

“Currently South East European University dictates the quality trends in higher education, and the graduates that come out from this university with their knowledge and preparation are giving very successful contribution to economic and social development, wherever they are engaged.”, said Minister Ademi.

President of the University Board, Prof. Dr. Denis Farington, in his address, among others, spoke about the importance of preserving the university model, recalling the efforts and steps that took place 20 years ago for its establishment.

“Now there is a new Law on Higher Education with a rather different structure to ours in the public universities: some Articles apply to us, but we seek to maintain the ‘Splugenschloss model’ which has definitely worked well. Personally, I see no good reason to change it significantly; there is no need to fix something which is not broken”, said the President of the University Board, Prof. Farington.

During the celebrations of the anniversary of the University, the PhDs candidates were also promoted, who symbolically received their diplomas from the Rector.

For the artistic part of the ceremony the Choir of University of Tetovo was engaged, as was a well the band ‘Triola’, from Tetovo.