“Beginnings of political pluralism in Macedonia and post-communism” was the topic of the third international conference held on Thursday (October 18, 2018), at SEEU Centre in Skopje. 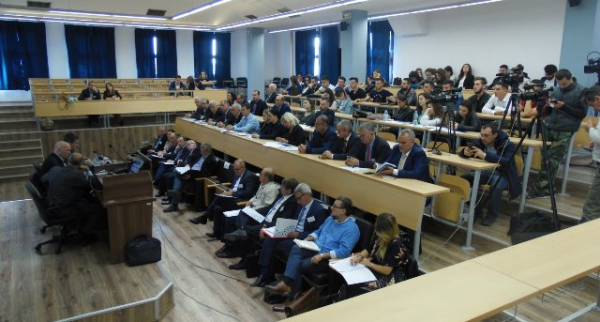 The conference was opened, by the SEEU Pro-rector for Academic Planning and Digitalisation--Prof. Dr. Vladimir Radevski, who said: “it is a pleasure for us to gather such important names from the field of politics and science at our University”. In the opening part address speeches had the Dean of the Faculty of Contemporary Social Sciences -- Prof. Dr. Memet Memeti and the Conference Coordinator--Prof. Dr. Hasan Jashari.

At the conference were presented scientific papers about the beginnings of pluralism and the creation of the first Albanian parties in Macedonia, highlighting key moments related to the political and economic context of Macedonia.

The conference was held in plenary sessions, enabling participants to debate and share ideas about the beginnings of democracy in Macedonia, comparing them with the political moments in Macedonia and Balkan region in general.

The MPs of the Macedonian Parliament presented papers on the beginnings of pluralism and democratic movements of Albanians in Macedonia. At the conference were addressed topics for creation of the first democratic media and equal regional development in the Republic of Macedonia, as well as other topics of various aspects related to the beginnings of pluralism in Macedonia and in the region.

The presented papers will be published in the Conference proceedings.