The Inauguration of Acad. Prof. Dr. Abdylmenaf Bexheti as the Third Rector of SEEU 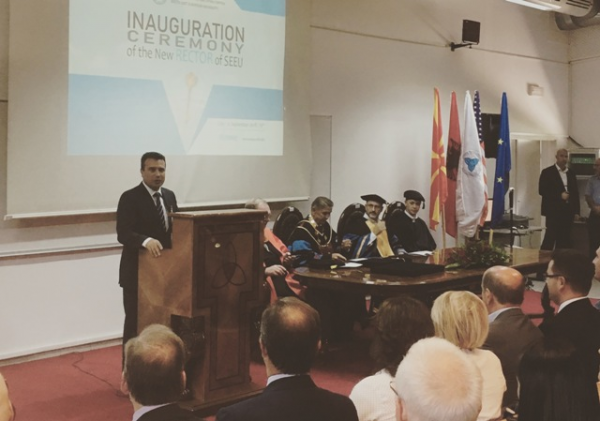 In this ceremony the President of the University Board, Dennis Farrington, symbolically gave the University's insignia and key to Acad. Prof. Dr. Bexheti, thereby officially inaugurating him as the Rector of South East European University.

Prime Minister Zaev said, “It is a great pleasure to be present at the inauguration ceremony the new Rector of one of the most renowned Universities not only in Macedonia, the region, and South East Europe, but also in Europe. It is a great pleasure for me to be present in this solemn act, to wish to the Rector a successful mandate, to wish to preserve and advance the missions for which the University was established. Thus: to design educational and scientific activities here in Macedonia, by following the example of multi-ethnicity that will shine in the whole region. We know that SEEU is a creator of society, which we over the years strive to build. Believe me, as a person and as politicians I have learned a lot from the mission and purpose of the existence of this University. I believe that with the new Rector, the Rector’s Council, professors and students, you will continue to advance this mission."

Prime Minister Zaev continued, "For Macedonia is very important and very necessary that from the University to come out professionals. Young generations, to whom we leave Macedonia in its inheritance, are an invaluable asset, which comes from our Universities. I want the University to continue and intensify cooperation with other universities, not only in the country, but also with international ones, to bring more qualitative knowledge here. I am convinced that in the period to come, the University--led by a renowned and respected academician, such as Prof. Bexheti--means only progress for quality assurance. I want you to count on the support from your government, from the Government of Macedonia. Of course, we participate with symbolic financial means, but my message and that of the Minister of Education is that if you continue to give us more qualitative students, we will increase our financial support. SEEU has shined in all aspects, by producing excellent staff, who are today excellent officials in Macedonia both in the public and private sector.”

Rector Acad. Prof. Dr. Abdylmenaf Bexheti thanked all those who helped and contributed to the establishment and development of the University.

Rector Bexheti continued, "I would like to thank the international institutions--from the USA, the EU, non-EU European states, the Soros Foundation, the DAAD Program--for all their support since the establishment of the Institution up to this day. Without them this project would not exist. At the same time, I would like to thank the Government of that time and all the other governments up to the present, for the political will in the establishment and the continuous support that they are giving to us. Great thanks go to the Government of the Republic of Macedonia for their sincere support both institutionally and materially. The first one for the preservation of the specific status of organization and functioning and the second for the material support that continues and we hope to adapt to the trend of recognizing the public interest we create in the society as a whole.”, said Rector Bexheti.

Rector Bexheti also presented his vision for the University's journey in the future, pointing out that the highest priority focus remains on quality standards in both wings - teaching and research.

“Liberal education as a group of intellectual instruments along with vocational training should create a sense of greater social responsibility, empathy and understanding to better the lives of people. With these goals that create value and public interest, we can justify the international and local community's investments at the same time,” said Rector Acad. Prof. Dr. Abdylmenaf Bexheti.

“Ladies and gentlemen, universities are unique institutions. If you haven’t worked in one you can have no concept of the challenges faced worldwide by demographic changes and the effects of information technology. They are places of transformation, places where lives are changed, places where knowledge is made and remade. And places where the future is forged. Universities are also places that are constantly being reshaped,” said the president of the University Board, Prof. Dr. Denis Farrington.

The former Rector of SEEU, Prof. Dr. Zamir Dika, reviewed his experience during the eight years he has led this institution.

“For eight consecutive years, as Rector of South East European University, thanks to the cooperation with each of you - without exception, starting from the University Board, co-managers in the Rectorate, the management team of Deans and pro-deans, heads of administration…thanks to every employee at any level and place of work. I humbly declare in public before you that you have given to me the most valuable experience in my life and you have offered me the happiest moments that a person can have in a work environment. For this, I will be eternally thankful,” said Prof. Dika.

The Rector of the University of Tetova, Prof. Dr. Vullnet Ameti, as a sign of respect donated to the Rector of SEEU, Acad. Prof. Dr. Abdylmenaf Bexheti a painting symbolizing his wishes for success and fruitful cooperation.